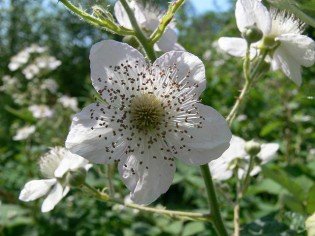 All of us know the tale of Sleeping Beauty and how long, long ago she was enchanted by a Wicked Witch into a deep slumber lasting a thousand years. How the enchantment fell on the people around her and there grew up a thick brier (bramble) around the kingdom. In 2006 I discovered a book by Stephen Harrod Buhner, The Lost Language of Plants

, around that same time I also read Derrick Jensen’s amazing book, A Language Older Than Words, both of these men spoke of a different educational system, and how to study this open and multi-dimensional school of nature to learn to understand and interact with it. I had become interested in these authors because of a biodynamic agriculture course I had taken at one of New Zealand’s oldest biodynamic farms, Hohepa Farm in Hawkes Bay.

We were taught by John Ridout who is one of the best teachers I have ever had. He found ways to allow us to experience nature and find our own answers instead of telling us how to think. Underlying all of these various people’s principles runs the hermetic Law of Similarities. The fairytale of Sleeping Beauty is a great allegory for our modern world, the enchanted people are ‘alive’ but asleep, surrounded by an abundant source of vitality and good health. Today, people are drugged into an enchanted sub-living state by over-processed foods (among other things) while surrounded by thickets of extremely healthy blackberries in wild and free abundance. One aspect of the Law is that the very plants that can cure humankind’s dis-harmony grow right on our doorstep, eagerly waiting to be recognized and utilized. 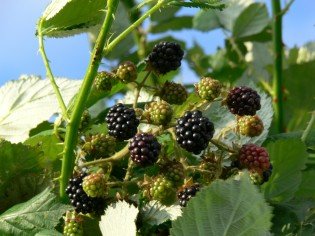 The bramble is a member of the Rosaceae (rose) family, in the Rubus genus which includes many types of berries (which I refer to as brambleberries) such as raspberries, blackberries, boysenberries, blueberries, huckleberries, cranberries, strawberries and many others. According to legend the rose family was originally a gift for mankind from the passionate life-loving goddess, Venus. The berries of the Rubus family all have similar properties, with slight variations between species. One of these constituents is phytoestrogens, and raspberry leaves in particular have been used to tone the uterus and re-balance female hormones for millennium in various cultures. Brambleberries are very good for digestion, insanely high in antioxidants, have high levels of vitamin C and E, folic acid, magnesium, salicylate, tannins and soluble fiber. They are also astringent and are useful for hemorrhoids, diarrhea or stomach flu. The berries, leaves and roots all contain varying amounts of these properties. Brambleberries grow with such exuberant abundance that they are actually considered a noxious weed all over the world and are often sprayed with poison in vain attempts to control them. (When foraging, avoid brambles by a busy roadside because of car exhaust and possible spraying.) 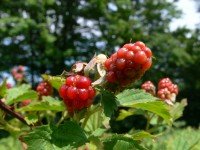 Worldwide, people in the know head out in the summer with kids in tow (or vise versa) for the most enjoyable adventures of plucking the juiciest of berries from the tangle of vicious thorns, spiderwebs and nettles. These wild brambles often grow in equal abundance within cities as without and our new home in Vancouver, BC has been no different. We actually feel fortunate to live in a city that isn’t overrun by deer! The year we lived in the wilderness of the pristine Catskills of New York, was sadly disappointing in the berry-picking area as I only managed to bring home a couple small bowls of sour, seedy berries that the deer didn’t want. That year, although I saw vast amounts of unripe wild blueberries, strawberries, raspberries and blackberries, I spent hours searching for a juicy ripe berry. The deer made paths all through the large bramble patches and I could see from their droppings (which consisted of tightly packed wads of berry seeds) that they were gorging themselves. I would beg the deer, whenever I spotted them, to leave some of the juicy berries for me to no avail. An interesting side note is that brambleberries need to be processed by an animal or bird’s digestive tract in order to propagate by seed (although they do very well just sending up new shoots from their roots once established). 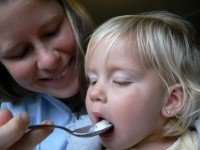 My sister is an avid Brambleberry Huntress. The first food her little daughter tasted after her mother’s milk was a freshly picked sun-ripened wild blackberry. It is funny to see the two of them now, a year later hunting wild berries together in perfect rhythm and harmony, deep purple berry juice staining their hands and lips. Blackberry juice, it turns out is just as good for your skin applied externally as it is taken internally. The powerful antioxidants contained in the juice prevents wrinkles and sooths sunburn. A flip side of this gift from Venus is that the plant carries her blood-lust with it, teaching us that the very best pleasures come with a measure of struggle and sacrifice. It is interesting to see that even little fingers on fresh hands will still reach back for more of that juicy sweet fruit, while a big tear dangles from clumped eyelashes from the last mishap of pricked fingers. My sister seems to instinctively know when the little lass is trapped in a bramble—Amaia will stop moving instantly when caught, and look to her mother, who has somehow torn herself from stuffing her mouth with juicy berries at exactly the right moment to lift the little girl from the prickly trap to glistening berries dangling just inches from her eager fingers…

I fell in a bramble bush while trying to walk tightrope on a fence when I was around 5 and scratched up my chest, but I still can’t resist clambering directly into a ditch full of blackberry brambles in flip-flops and a tank top (my sister goes in with shorts on as well), if I spot juicy berries at the hight of the season. On a good day you can easily gather enough blackberries to dry, freeze, or make into jams and chutneys. As kids we loved to compete to see who could avoid the most scratches, who could get the worst scratches and who could get the fattest berries. Brambling is challenging but tasty fun. 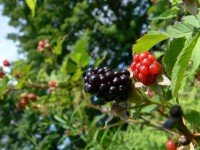 Native Americans traditionally collected enough berries to use to keep themselves healthy through the winter. The polyphenol antioxidant Gallic acid, which is especially high in brambleberries is a good antiviral and antibiotic and is not affected by heat. Berries are as good for you in soups or jams as they are eaten fresh, and they dry easily when spread out one layer deep in the summer sun. Fruit leather can also be made with the help of the sun and fresh berries make a lovely raw sun jam or jelly. When collecting blackberries for jam, collect some unripe berries along with the plump juicy dark ones to raise the pectin content, unless you react to tannins as the amount of tannins is higher unripe berries. This year we created the most delicious homemade and raw Wild Blackberry, Cardamom and Walnut Ice Cream. There is nothing like the combination of fresh wild blackberries and raw cream from a pasture grazed cow.

As I write this we just have passed the traditional date of Michaelmas (29th September) which is considered the last day to pick blackberries on in the Northern hemisphere, the berries that are left at this time will most likely be moldy and potentially toxic. Legend says on this date the devil pisses on the brambles, poisoning the remaining berries. In the Southern hemisphere the equivalent of this date falls around Lady Day (25th of March). In autumn the roots of the bramble are collected, dried and powdered by herbalist, and for the more industrious of us, the long canes can be woven into baskets to use when brambling next summer.

Click here to cancel reply.
« Food Justice For All
Guidelines to Choosing a Good Probiotic »