A Language Older Than Words 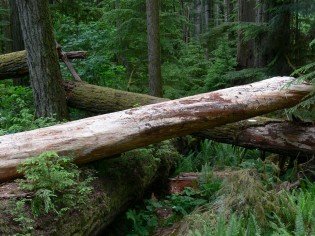 This was a GREAT book (size-wise and content-wise), but every word was worth it. It is written from the heart and shows a different way to look at our world. A book from someone who has looked deep into his own soul and in doing so, into the dark soul of our civilization.

It brings back to the forefront of consciousness the ancient perspective of community and communication with our surroundings. It gently forces us to question our unconscious assumptions.

It is definitely worth reading especially if you are questioning what you are doing in your life and would like to speed your transition. His writing is deep and thoughtful. It is best to read it for yourself.

A Few Favorite Passages to Get You Started:

Religion, science, philosophy, politics, education, psychology, medicine, literature, linguistics and art have all been pressed into service as tools to rationalize the silencing and degradation of women, children, other races, other cultures, the natural world and its members, our emotions, our consciences, our experiences, and our cultural and personal histories. -p3

I no longer see Descartes’ statement (I think therefore I am) as arbitrary. It is representative of our culture’s narcissism. This narcissism leads to a disturbing disrespect for direct experience and a negation of the body. -p8

There is the necessary violence of survival, the killing of one’s food. Then there are senseless forms of violence so often perpetrated by our culture: child abuse, rape, military or economic genocide, factory farms, industrial forestry, commercial fishing. But violence also can be like sex: a sacramental, beautiful, and sometimes bittersweet interaction. -p35

Perception is of course intimately tied to preconception. I have, as is true for each of us, a pair of cultural eyeglasses that will determine to a greater or lesser degree what will be in focus, what will be a blur, what gives me a headache, and what I cannot see. -p40

In science, you repeat an experiment in a controlled environment, and you eliminate variable after variable until any moderately careful person can make the same thing appear. But conversations only happen once. -p64

A primary purpose of Judeo-Christianity has not been to move us toward a community where the teachings of someone like Jesus-simple and necessary suggestions for how to get along with each other-are made manifest in all aspects of life, but instead to provide a theological framework for a system of exploitation. -p78

It is not possible to commit deforestation, or any other mass atrocity–mass murder, genocide, mass rape, the pervasive abuse of women or children, institutionalized animal abuse, imprisonment, wage slavery, systematic impoverishment, ecocide-without first convincing yourself and others that what you’re doing is beneficial. You must have, as Dr. Rober Jay Lifton has put it, a “claim to virtue.” -p85

This doesn’t mean that those who exploit don’t consciously fabricate or lie, for they clearly do. Like the layers of an onion, under the first lie is another, and under that another, and they all make you cry. -p90

This notion that sexuality and women–in fact the earth and all direct experience–brings men down from what is considered most important–the heights to which manly men may attain–is a central theme of our culture. The denigration of the flesh is essential to science, where a body is considered “nothing but a statue or a machine,” and where direct experience is considered “mere anecdotal evidence” or noise to be ignored while we search for the real signal. -p91

By the time Luther gave voice to his hatred, in the sixteenth century, women had been getting burned at the stake for nearly seven hundred years, since the council of Salzburg in 779 C.E. approved the torture of witches. Of course the legalized murder of women goes much farther back. Millions of women–up to twenty percent in many communities–were tortured and killed on the pretence that they were witches, and that they had committed crimes against men. -p92

I know that beneath the fear and hatred, beneath the urge to control and destroy, far beneath the scarred shells that protect and define us, people are good. -p98

Love controlled is not love; just as sex demanded is rape and acceptance expected is subservience. -p98

Fearing death, fearing life, fearing love, and fearing most of all the loss of control, we create social rules and institutions that mirror our fears and reinforce our destructive behaviors. -p99

I’ve since come to understand the reason school lasts thirteen years. It takes that long to sufficiently break a child’s will. It is not easy to disconnect children’s wills, to disconnect them from their own experiences of the world in preparation for the lives of painful employment they will have to endure. Less time wouldn’t do it, and in fact, those who are especially slow go to college. For the exceedingly obstinate child there is graduate school. -p102

I have nothing against education; it’s just that education-from the Greek root educere, meaning to lead forth or draw out, and originally a midwife’s term meaning to be present at the birth of-is not the primary function of schooling. -p102

We should not be surprised, then, that our culture as a whole must destroy all life and that we individuals must not dwell upon the horrors we visit not only upon others but upon ourselves, that we dwell instead upon the daily earning of our bread, and beyond that pile upon ourselves project after project to keep ourselves always occupied, always unconscious of the fact that we do not have to live this way, always blinded to alternatives. For if we looked we might see, if we saw we might act, and if we acted we might take responsibility for our own lives. -p106

One method Nazis used to control Jews was to present them a series of meaningless choices. Red identity papers were issued to one group, while another received blue. In making these choices victims felt the illusion of control over their destinies, and often failed to reject the entire system. Resistance to exploitation was diminished. -p106

Because life feeds off life, and because every action causes a killing, the purpose of existence cannot be to simply avoid taking lives. That isn’t possible. What is possible, however, is to treat others, and thus ourselves, with respect, and to not unnecessarily cause death or suffering. -p198

Anton Chekhov once said he would like to read a story about a man who squeezes every drop of slave’s blood from himself. That is first what we must do. For when a slave rebels without challenging the entire notion of slavery, we merely encounter a new boss. But if all the blood is painfully squeezed away, what emerges is a free man or woman, and not even death can stop those who are free. -p288

Any political, economic, theological, or philosophical system that in practice rewards production over life is illegitimate because, tautologically enough, it does not value the lives of its citizens over the needs of production. Such is sufficient to define illegitimacy. No other measure is needed. -p368-369

It is not possible to recover from atrocity in isolation. It is, in fact, precisely this isolation that induces the atrocities. If we wish to stop the atrocities, we need merely step away from the isolation. There is a whole world waiting for us, ready to welcome us home. -p375

Click here to cancel reply.
« What Does Cookery Mean?
Pogo a la sundae – Democrat vs Republican »