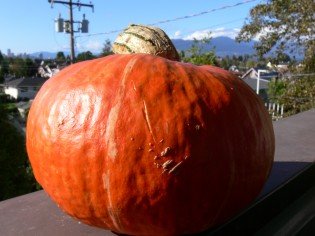 It is unusual to find a vegetable that not only removes DDT from soil, but reduces the likelihood of getting emphysema or lung cancer for smokers, expels tapeworms and other parasites and is a focus of community and entertainment during Halloween. Pumpkins and winter squash do all this and more. Not only is the flesh of the pumpkin delicious and nutritious, but also it’s seeds and blossoms, in fact, in some places even the leaves are added to soup. This useful fruit is often overlooked and has the ability to create healing in both the Earth and our bodies. Pumpkins and winter squash come to us from Central and South America and were rapidly accepted around the world when introduced by Spanish and Portuguese traders. They were originally grown for the seeds as original varieties didn’t have much flesh.

Winter squash consist of many species within the Cucurbita genus, all of them cross-breed readily. They are different than summer squash in that they have thick, protective skin and a cavity that holds the seeds. Some of the more well known varieties include Butternut, Hubbard, Kabocha (Japanese pumpkin), Acorn, Spaghetti and Atlantic Giant. The ones with deeper orange color have particularly high levels of vitamin A in the form of beta carotene. Their thick skins are also particularly useful, allowing them to be stored for up to 6 months under the right conditions, without refrigeration. Pumpkins are also a good vegetable to buy if you are broke and can’t afford organic produce—conventionally mass-farmed winter squash use less pesticides or herbicides and are not on the hot-list of genetically modified organisms that have been injected into our food-web. 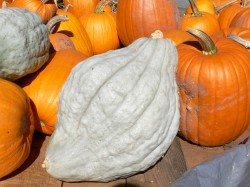 Apart from the uproar around Halloween, we generally don’t hear much about pumpkins. They aren’t a flashy gourmet food item so we take them for granted. Pumpkin is quite versatile and makes a fantastic soup, custard, curry or salad and can be enjoyed equally in savory or sweet preparations. Although I was born in the USA, I have always been repulsed by the mouth-feel of pumpkin pie. One of these days I will try this old fashioned recipe that is thought to be the fore-runner of pumpkin pie—stuff the cavity of a pumpkin with diced apples, spices, maple syrup and cranberries and roast it. This is a delightfully exotic alternative for people who find the mealy combination of pumpkin puree and custard disturbing.

Although the pumpkin business in the USA is a multi-billion dollar industry, most of the pumpkins are just used for decoration—carved into Jack o’ lanterns and then discarded, which is very sad and more than a little wasteful especially in a world concerned about hunger shortages. Fortunately for New Zealand the traditional date of Halloween comes in spring, making it difficult for those in the Southern Hemisphere to imitate this decadent waste of a truly generous vegetable. Jack o’ lanterns were traditionally used to make pumpkin pies with. Our modern Jack o’ lantern was created when Irish immigrants found that pumpkins made better lanterns than the turnips they had used back home to make lanterns for Samhain (All Saints Eve). Pumpkin growing competitions are another rather wasteful feature at harvest fairs around the world as the flesh of these overgrown beasts is stringy and unpalatable. Techniques used to grow these monsters include using the Atlantic Giant pumpkin breed, talking and singing to the pumpkin as well as injecting the plant with milk or other nutrients. These competitions have been going on for quite some time and have inspired several children’s books. 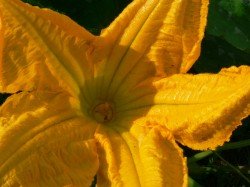 As mentioned above, deep orange winter squash are an excellent source of vitamin A. This is just the beginning of the story—they are also a good source of vitamin C, potassium, manganese, folate, omega-3 fatty acids, vitamin B1, B6 and B3. The seeds have high levels of zinc as well as omega-3 fatty acids, magnesium, manganese, phosphorus, iron, copper and protein. Pumpkins are particularly good for men’s health, which may be why the Kabocha is considered an aphrodisiac in Japan. Recent studies back this up with the discovery that consuming just ½ cup of pumpkin a day helps reduce symptoms of benign prostatic hypertrophy (BHP), (the prostate gland becomes enlarged, causing urinary and sexual disfunction).

Some years ago I was trying out various diets and detoxification fasts. At some point I went on a strict low carbohydrate diet to reduce candida in my system for about a month. Burmese pumpkin curry was a dish I often turned to to help feel like I had actually eaten something substantial. At the time I found it surprising that winter squash and pumpkins were allowed on the diet as they have a slightly sweet flavor. It turns out that eating food rich in carotenoids is actually helpful in balancing blood sugar and insulin levels. Beta carotenes also are powerful antioxidants, and prevent the oxidation of cholesterol in the body. Oxidized cholesterol builds up in blood vessel walls, leading to many other issues. One of these antioxidants, beta-cryptoxanthin (responsible for the deep orange color of the flesh of pumpkins) has been found to significantly lower the risk of developing lung cancer and is thought to be one of the reasons that some people live to a ripe old age and never get lung cancer despite being heavy smokers. One study showed a 37% lower risk of lung cancer in people eating cryptoxanthin-rich foods. Smoking cigarettes depletes vitamin A, while the beta-cryptoxanthin replenishes it. 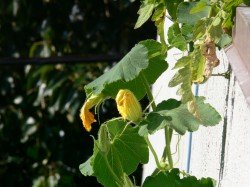 Pumpkins are quite a useful plant to grow at home, and are relatively simple as long as you have bees around to happily fertilize the flowers. The plant grows both male and female flowers on the same vine. There is a squash bee that loved to fertilize this species, but it has become rare, as it is very sensitive to pesticides and so the flowers often need to be hand fertilized these days. It is a thrilling experience to watch a honey bee that has found it’s way into the deep heart of a squash blossom, the happy excited busy humming and vibrating of bee and blossom as the bee rubs it’s body all over the bright yellow flower, then rushes off to another but is soon back again. The pleasure and pure delight of the bee and blossom are tangible in the air as they work together to bring life to these amazingly nourishing vegetables. It the blossoms aren’t fertilized a squash will begin to form, but then die, unable to mature.

Another great product from the pumpkin is pumpkin oil. This product originated in Southern Austria and has developed into quite an industry. The pumpkins that are used to produce this item are called Styrian pumpkin and has black seeds. These are especially handy for making oil as they have no husk or shell around the kernel, the resulting oil is a rich green color and has a nutty taste. It is best not heated or it will burn. In Austria they drizzle it over vanilla ice cream, or mix it with cider vinegar and salt to make a simple, but very nutritious, tasty salad dressing.

As mentioned earlier, it has recently been found that pumpkins and zucchini have a useful ability to remove DDT from contaminated soil. The DDT in this case is then transferred to the plant which must be carefully disposed of. This process is called phytoremediation, and is a clever and affordable solution. It is important to note that any pumpkins (and the rest of the Cucurbita family) grown in soil that has been sprayed with DDT should not be consumed.

Styrian pumpkin seeds do not have a shell, the seeds can be processed easily into pumpkin seed oil. For example, the seeds from this pumpkin type contain vitamins A, B1, B2, B6, C, D, E, and K, as well as many minerals including calcium and magnesium.

Click here to cancel reply.
« Watering the Garden
Food Justice For All »
We use cookies to ensure that we give you the best experience on our website.
If you continue to use this site we will assume that you are happy with it.