Rose Hips on the Tree of Life

Unlike people, roses probably do not consider themselves as having a purpose in life. But if a rose bush did have a mission, I expect its greatest sense of achievement would come from creating, not just a whole lot of beautiful flowers, but the grand array of round, red rose hips which come after them. -Elder Woman 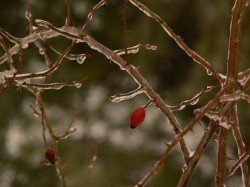 When days are short and cold, most of us enjoy reading by a fire, legs tucked under a blanket, sipping hot rose hip tea to protect ourselves from unwanted viruses. Fortunately, the frantic Christmas shopping that consumes the shortest days of the year in the Northern Hemisphere, are not an issue in New Zealand, and we can take full advantage of this sacred time for going within and nourishing our roots. Winter is the traditional story-telling season, when the old folks share their wisdom with tales that allow the listener to gain various perspectives into their life experiences, as they process the year’s events.

My grandparents died when I was young so I missed their stories. But, I am fortunate to have a tangible way to connect with my Mormor (mother’s mother in Swedish) through her cookbooks, recipe clippings and the notes she added in the margins. One of the items I found scrawled on a scrap of paper was Nypon Soppa (Rose Hip Soup), which remains a Swedish favorite today. The preferred rose used is the dog rose (Rosa canina) but the rugosa rose (Rosa rugosa), which have large, flavorful hips, are also commonly used. These wild roses are packed with vitamin A, B3, E, D, C, K, lycopene, bioflavonoids, as well as the minerals calcium, iron, phosphorus, potassium, silica, magnesium and sodium. The dog rose hips have the highest amount of Vitamin C and bioflavonoids, and also contain proanthocyanidin glycosides which are antioxidants currently being tested for their effectiveness in assisting with cases of osteoporosis. Other uses for these happy red fruits include boosting the immune system, as a powerful painkiller and inflammatory, easing digestion and assisting the kidneys, circulatory system and heart.

Dog rose hips are especially helpful for osteoarthritis. In a study that included more than 300 patients who were given different pain-relieving medications for three months, rose hips were found to be three times more effective than paracetamol, and about 40 per cent more effective than glucosamine (source). Rose hips also don’t cause the common side effects of pain-killing medication, constipation and drowsiness. Vitamin C is well known to be extremely beneficial for connective tissues and helps to repair the body, not simply providing a bandage to cover up the symptoms. 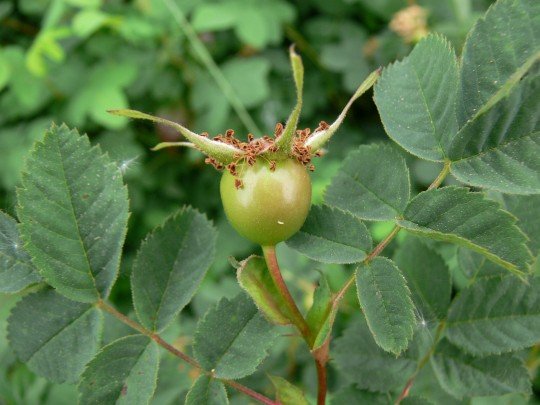 The dog rose has been used medicinally for thousands of years and was believed to cure the bites of rabid dogs. This rose is also the famous brier rose from many fairy tales, for example Sleeping Beauty. The oldest living dog rose was planted in Hildesheim Abbey in 798 AD by Charlemagne on behalf of his son Louis the Pious. The church was destroyed in an air raid in 1945, and the rose tree was burned. The root stock survived and the tree is now 9 meters (30 feet) high and over 1,000 years old. It seems, in fact, that the burning was good for this ancient rose as Theophrastus, the ‘father of botany’ tells us of early Greek pruning methods in which they burn 5 year old rose bushes.

If the rose is burnt, it bears better flowers; for then, they say, the roses are improved.

This phoenix-like characteristic of the rose may be why the Persians traditionally depicted the tree of life as a rose tree on their carpets and tapestries.

Rose hips are an especially powerful preventative and healing tool during the winter. To this day the Swedish consume more rose hips than other country. The dog rose hips have been used traditionally as a diuretic and laxative and are useful in treating influenza, diarrhea and urinary tract disorders. Rose hips are very good for skin and connective tissue, as well as maintaining healthy gums. I have used rose hip oil as my sole moisturizer for 4 years now as it is good at preventing wrinkles as well as repairing the skin from sunburn. In fact, with the recent concern over sun-lotions and lack of vitamin D exposure, a little rose hip oil after being in the sun is very helpful. It is also used to heal scars after surgery or radiation treatment. Perhaps because rose hip oil is so popular it has made it hard to find rose hip jams, jellies or syrups commercially. But these are all very easy to make if you have access to rose hips and are an incredibly delicious source of vitamin C, that makes a great spread for toast, or compote for pancakes that kids love. 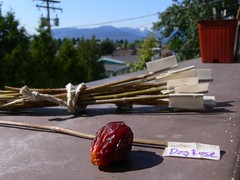 Rose hip tea, on the other hand, can generally be found in any health food shop and is often combined with hibiscus. This provides a very gentle support for the kidneys, while boosting the immune system and has no side effects. These qualities also make it a helpful remedy for seriously ill people who cannot handle strong infusions.

If you don’t have your own hedge of roses, keep your eyes open for a neighbor’s rosebush that isn’t being harvested and beg the owners to let you at it, or better yet, head for the hills as the dog rose has naturalized readily and would be considered an invasive species if everyone, including the bees didn’t like it so much. Proceed with respect even though any rose hips you harvest will be doing native plants a favor. The main caution is to avoid plants near roadsides as they are often sprayed with strong herbicides and are probably polluted from car exhaust.

Rose hips are best collected a little into winter as they are ripe and will be easier to pick. Once you have collected a reasonable amount it is important to process them in a way that will remove the small, irritating hairs that are inside the hip. The rose hip also has an enzyme that starts to destroy vitamin C upon contact with air. You may have heard that vitamin C is destroyed with heat, but the enzyme destroys it more rapidly than the heating will. The best way to prepare rose hips is not to try to cut them open and remove all the hairs, but to give them a wash and then put them in a pot and simmer them for about 15 minutes until they are soft. Then they can be strained through a fine sieve to remove the unwanted seeds and hairs. This can then be made into the traditional rose hip syrup, jam, jelly, tart, or soup.

Another interesting product made from the dog rose is a Slovenian drink called Cockta. This drink was invented in the 1950s as a national, healthy alternative to Coca Cola and includes 11 traditional herbs as well as the dog rose hip. It is touted as being a healthy tonic and contains no caffeine. The Danish also have a rose hip schnapps, and rose hip wine was a favorite tonic, similar to dandelion wine. 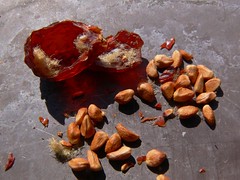 With the current resurgence of the movement to support your local economy and the rising cost of transporting food, rose hips are a sensible alternative to oranges, mandarins and supplements. Unfortunately most hybrid roses don’t have high concentrations of Vitamin C or bioflavonoids like the wild roses do. Rosa canina or R. Rugosa can contain between 1500-2500 grams of Vitamin C per 100 grams of weight. Oranges contain around 53 mgs per 100 grams of weight, so head for the hills to collect these vitamin C powerhouses gifts from the bush.

This is an old folk-riddle that has been passed down for centuries in Scandinavia:

Riddle of the Man in the Forest