Constitutional Battle For Fresh Milk Expands To BC 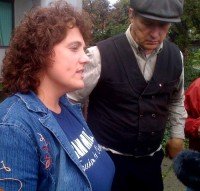 Fresh Milk advocate Alice Jongerden filed an application today in the New Westminster courthouse in British Columbia to challenge the constitutionality of the prohibition against the production and distribution of Fresh Milk.

Alice Jongerden, the founder and former operator of a 450-member Fresh Milk cowshare in Chilliwack, BC, has been under attack by the Fraser Health Authority since 2009. In March 2010, the Health Authority obtained an order preventing Ms. Jongerden from distributing Fresh Milk for human consumption. In December 2010, Ms. Jongerden was cited for contempt for breaching the March 18, 2010 order, although no penalty was imposed. She has since ceased operations.

Please click here to donate to support our legal battle for food freedom.

“Fresh Milk is a nutritional choice about what I want to put into my own body. It’s a long-term health choice to choose fresh milk over industrial processed milk”, said Ms. Jongerden. “Laws that prevent Canadians from choosing healthy food and inflate the cost of healthy food are making us sick.”

Ms. Jongerden’s constitutional challenge joins the Ontario challenge spearheaded by Ontario dairy farmer Michael Schmidt, whose successful defence of Fresh Milk charges is under government appeal before the Ontario Court of Appeal. Mr. Schmidt now manages the Chilliwack cowshare where milk is produced and distributed as a cosmetic product, something the Health Authority assumes is a guise to allow determined Fresh Milk drinkers to circumvent Provincial regulations.

“Fresh Milk is a healthy choice,” said Mr. Schmidt. “Canada is the only G8 country that bows completely to the processed milk lobby. Canadians need the right to choose fresh wholesome food over processed food.”

Jason Gratl of Gratl & Company is counsel for Ms. Jongerden for her constitutional challenge.

This post is part of Fight Back Fridays over at www.foodrenegade.com

Click here to cancel reply.
« Support Vancouver’s Raw Milk Community
Boonville Milkman »
We use cookies to ensure that we give you the best experience on our website.
If you continue to use this site we will assume that you are happy with it.