Published in the column A Flirtation With Herbs in Healthy Options Magazine, New Zealand, April 2009

I was away for much of the summer, helping my sister with her newest addition to the family. As a result, my balcony garden didn’t do so well. My spaghetti squash died, my nasturtiums were killed in an aphid infestation, my calendula was ravaged by fungus and the coriander bolted. I managed to harvest about twelve tiny, incredibly delicious tomatoes, but my bumper crop was coriander seeds. Even so, there wasn’t enough to cover even a weeks worth of cooking (I love coriander), but it was fun hanging out with those clusters of gleaming green balls bouncing on the breeze in the sun amongst a delicate backdrop of frilly coriander leaves and lacy white flowers. I have a couple seeds in my mouth as I write this and the flavor is much fuller than any store-bought coriander seed I have ever tried. I have been adding them to homemade kimchi and bread. I now think of the coriander seeds as what they technically are: nutrient powerhouses and flavor-packed fruits (Fructus coriandri) not simply a dry spice.

Coriander is one of the first herbs I knew of, my mother used to grow it with dill, sweet corn and peas, occasionally a pig would get into the yard and us kids would go tearing out of the house to chase it out, squealing and snorting in terror, before it dug up our garden. My parents were missionaries, so we grew up in a village in Papua New Guinea that had lots of pigs. We later went to boarding school in Penang, where everyone seemed to eat coriander/cilantro on everything.

I was therefore quite surprised to find there are people who find the smell and flavor of coriander revolting. I remember the discovery well. I was working at Mudbrick Vineyard, out at Waiheke Island, our Sous Chef at the time was from England. He was revamping the menu and we were making a tomato, lemon-grass and coriander broth for green-lipped mussels. As I started to load in the coriander he said, “Go easy on the coriander, most people can’t stand it.” I couldn’t believe my ears, from my perspective this confirmed my preconception that the British palate was dull and unadventurous. I secretly added more when he wasn’t looking. 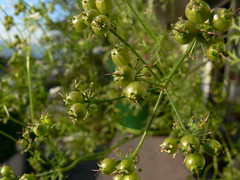 Coriander (Coriandrum sativum) also called cilantro (particularly the fresh leaves), is native to the Mediterranean and was a favorite spice of the Romans. The soldiers used it as a rub to preserve meat, taking it with them on their conquests, spreading the herb to the far reaches of their empire. In fact, the Romans brought coriander to Britain centuries ago, where it naturalized and can be found growing wild in the fields. Although my assumptions about British taste-buds were unfounded, there often seems to be an underlying disgust of the herb in old Western herbals. Many of them spend a fair amount of energy underlining how revolting the odour of the leaves and young fruit is.

Roman cookbooks clearly show an abundant appreciation of coriander, so it seems strange that the herb is absent from modern Italian cuisine. The only explanation I have come across for this is that it was forgotten during the dark ages, because of the lack of spice trade. This doesn’t really make sense seeing as it grows naturally in Italy. This made me wonder if coriander, like many of the other aromatic umbelliferae was an effective contraceptive and so was wiped out during the Inquisition, but it isn’t. In fact the Chinese have a saying that if you eat the fruit of coriander during pregnancy your baby will be a genius, and one of the tales from the Arabian Nights is of a man regaining his fertility through use of coriander. Coriander was also frequently used in love potions, often added to wine to make a powerful aphrodisiac that generated heat and lust. But why Italians stopped using coriander is one of the mysteries of coriander.

Another bizarre thing are the Coriander/Cilantro Wars that rage across the internet. It seems the part of the human population that finds coriander disgusting are also a very vocal group who are determined to do away with this “devil weed.” They are understandably tired of being ignored, laughed at and considered insane, and have set up a site: www.ihatecilantro.com where there is a graph of the demographics of coriander haters as well as thousands of personal haiku’s expressing visceral disgust for the herb. This is an example of one of the tamer ones:

The green enemy
The herb so vile, so evil
Ruins all dishes –fairygreen

The favorite theory at the moment is that the aversion is genetic, in particular the result of the inability to taste the chemical phenylthiocarbamide (PTC), which has a bitter flavor. Not being able to taste PTC was used to determine genetic paternity before we had any other method of genetic testing. A recent study showed that PTC may not be to blame. People who hate coriander generally are unable to actually taste the herb and often complain about an overwhelming “rotting-flesh” type odor that turns the stomach. There are also complaints that coriander tastes like soap. There are theories that the distaste has to do with enzymes. Coriander is a well-known companion herb, the aroma from the flowers and fruits attract predatory wasps and other pollinators that prey on unwanted aphids and mites. Perhaps coriander’s pheromone linalool, which attracts a certain type of male bee and is used in perfumes and food flavoring, is what causes certain individuals to react with such primordial dislike. The senses of smell and taste are intimately linked so there may still be a connection to PTC, but it is clear we need a lot more information to properly understand this complex herb.

Coriander oil has another powerful compound, dodecenal, which has the ability to inhibit growth of E. coli, Staphylococcus aureus and Salmonella choleraesuis as well as other types of bacteria. Salmonella choleraesuis is one of the most common causes of food-borne bacterial illness. Dodecenal gives coriander its refreshing citrus note. In a world where outbreaks are becoming widespread and overuse of antibiotics is a serious issue, coriander is a very handy herb. Coriander has been dubbed the most used herb world-wide. The oldest coriander seeds (about 8,000 years old) were discovered in a cave in Israel. Coriander has been used for diabetes, to lower cholesterol, prevent inflammation, regulate menstruation, for cancer, for allergies, as a preservative, anti-microbial and for digestion among other things.

Another remarkable property of coriander, is that it removes heavy metals from the central nervous system and is the only known herb that does this so effectively. The Vietnamese noodle soup, Pho, served with fresh coriander leaves is a perfect meal after a visit to the dentist, especially if you are having mercury amalgam fillings removed. The ability of coriander to remove mercury and lead from the body also make it an affordable way to detox from any heavy metals that might leach into your tap water, or from breathing in too many fumes while stuck in traffic.

Coriander fruits are particularly helpful for digesting carbohydrates and were traditionally used when making bread. For inspiration while writing this article, I made bread with my remaining coriander harvest. I love to make sourdough bread from scratch, I find the ancient act of kneading amazingly meditative and an excellent way to connect with ancient female rituals (it also tones the arms). The bread is out of the oven now and the roasted citrus aroma arises from the cooling bread, it reminds me of rye bread with orange zest. I bite into a warm slice, coated in butter which melts onto the keyboard as I attempt to share the experience with you. I definitely recommend coriander seeds as a tasty addition to bread. All I need now is some cheese.

Click here to cancel reply.
« The Pleasures of Fennel
Sugar and Intuition as Monsanto Strikes Again »