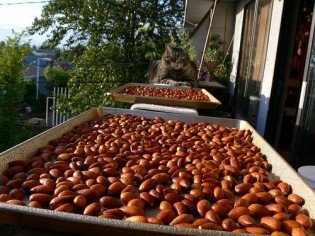 All the good stuff is under attack. Being on the GAPS diet we eat a lot of almonds, in fact I just finished making almond-cashew and honey cookies tonight. If anyone has a good source of almonds please let me know!

The mandatory pasteurization or chemical treatments protect consumers from salmonella. The requirement to apply them is also well within the Agriculture Department’s power, a federal judge ruled this week.

“The salmonella rule does not exceed the (department’s) authority,” U.S. District Judge Ellen Segal Huvelle concluded in a decision quietly issued late Wednesday, “and it was promulgated pursuant to the proper procedures.”

Huvelle’s decision is a victory for the Modesto-based Almond Board of California, which administers the agricultural marketing order by which the industry regulates quality control, research and advertising. The board recommended new safety rules in 2006 following incidents of salmonella contamination, and the Agriculture Department subsequently put them in place.

The 30-page decision, though, is another defeat for Fresno, Calif.-area farmers Nick and Steven Koretoff, Livingston, Calif.-based farmer Cynthia Lashbrook and others who complain the required treatments undermine their ability to sell organic produce for a premium price.

“People should be able to buy them,” Lashbrook said in a telephone interview Thursday.

Now, Lashbrook lamented, consumers keen on raw almonds will simply turn to foreign sellers, who are not bound by the Agriculture Department rules.

Raw, organic almonds can be sold for as much as 40 percent more than a conventionally treated almond.

All told, 15 organic almond producers signed on to the legal challenge first filed in 2008. Since then, the legal road has been a bumpy one.

In March 2009, Huvelle dismissed the original complaint, partly on the grounds that the farmers hadn’t exhausted their administrative options. The next year, the D.C. Circuit Court of Appeals reversed Huvelle and allowed the almond producers’ challenge to proceed.

Huvelle, appointed to the bench by President Bill Clinton, thereupon began wading through an extensive administrative record that spanned thousands of pages, ranging from transcripts to written statements.

“Many national retailers and smaller retailers of raw and organic almonds have ceased purchasing California organic almonds and replaced them with untreated foreign-grown almonds, which customers prefer based on the fact of non-treatment,” the organic farmers declared in a legal brief.

The almond board, in turn, declared at the time the new treatment rules were imposed that “while contamination in almonds is not common, the industry determined that aggressive measures were necessary to prevent any other occurrences.”

An almond board spokesperson could not be reached to comment Thursday.

California almond producers in 2010-11 shipped a record 1.6 billion pounds of almonds, with the crop valued at $2.8 billion. Production has grown even more since then.

Huvelle this week ruled on summary judgment, without having the case go to a full-blown trial.
Read more here

Click here to cancel reply.
« Sugar High: The Dark History and Nasty Methods Used to Feed Our Sweet Tooth
Father of Radiation Safety Says There is No Safe Level »