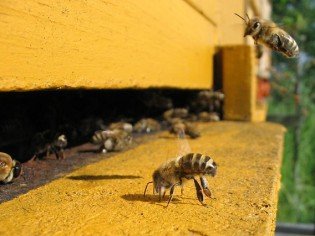 Honeybees in an apiary in Germany. Photo by: Björn Appel.

Scientists with the Harvard School of Public Health (HSPH) have re-created the mysterious Colony Collapse Disorder in several honeybee hives simply by giving them small doses of a popular pesticide, imidacloprid. Bee populations have been dying mysteriously throughout North America and Europe since 2006, but the cause behind the decline, known as Colony Collapse Disorder, has eluded scientists. However, coming on the heels of two studies published last week in Science that linked bee declines to neonicotinoid pesticides, of which imidacloprid is one, the new study adds more evidence that the major player behind Colony Collapse Disorder is not disease, or mites, but pesticides that began to be widely used in the 1990s.

Past research has shown that neonicotinoid pesticides, which target insects’ central nervous system, do not instantly kill bees. However, to test the effect of even small amounts of these pesticides on western honeybees (Apis mellifera), Harvard researchers treated 16 hives with different levels of imid,. acloprid, leaving four hives untreated. After 12 weeks, the bees in all twenty hives—treated and untreated—were alive, though those treated with the highest does of imidacloprid appeared weaker. But by 23 weeks everything had changed: 15 out of the 16 hives (94 percent) treated with imidacloprid underwent classic Colony Collapse Disorder: hives were largely empty with only a few young bees surviving. The adults had simply vanished. The hives that received the highest doses of imidacloprid collapsed first. Meanwhile the four untreated hives were healthy

“There is no question that neonicotinoids put a huge stress on the survival of honey bees in the environment,” lead author Chensheng (Alex) Lu, an associate professor at the HSPH, told mongabay.com. “The evidence is clear that imidacloprid is likely the culprit for Colony Collapse Disorder via a very unique mechanism that has not been reported until our study,”

That mechanism? High-fructose corn syrup. Many bee-keepers have turned to high-fructose corn syrup to feed their bees, which the researchers say did not imperil bees until U.S. corn began to be sprayed with imidacloprid in 2004-2005. A year later was the first outbreak of Colony Collapse Disorder.

It doesn’t take much to eventually kill the bees accord to Lu, who said an incredibly small amount (20 parts per billion) of imidacloprid was enough to lead to Colony Collapse Disorder within 6 months. 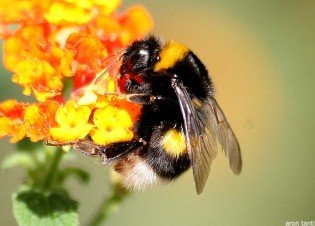 A U.K. team exposed buff-tailed bumblebees (Bombus terrestris) to small doses of imidacloprid, and placed the bees in an enclosed natural setting where they could forage free. After six weeks (a far shorter time than Lu’s study), the team weighed the nests and compared them with control colonies that had not been exposed. Treated colonies were on average 8-12 percent smaller than the colonies that had not been exposed, which implies that exposed bees were not gathering as much food. However, even more alarming was the case of the missing queens. Pesticide-exposed colonies produced 85 percent fewer queens: a total of only around 1-2 queens per hive. Queens are the most important bees in a colony, since they found new colonies after winter when all the other bees perish.

A second study, this one conducted in France, shows directly how neonicotinoid pesticides may be impacting bees, eventually leading to the collapse of the colony. Researchers glued tiny microchips to free-ranging western honeybees in order to track their movements. They then administered small does of a different neonicotinoid pesticide, called thiamethoxam, to a portion of the bees. Exposed bees were two to three times more likely to not return from foraging excursions than unexposed bees.

Their findings imply that neonicotinoid pesticide weakens a bees’ homing ability, so instead of returning to the hive, the bee gets lost and perishes. This would explain why hives impacted by Colony Collapse Disorder are found largely empty of worker bees: the pesticide theoretically impacts their ability to find their way home.

It has taken a long time to understand the link between Colony Collapse Disorder and neonicotinoid pesticides, because scientists were looking for an instant-killer, and not something that caused slow deaths over several months, says Lu. In addition he adds that scientists ignored “the fact that the timeline of increasing use of neonicotinoids coincides with the decline of bee populations.”

Lu says policy makers “need to examine the effect of sub-lethal doses of pesticides throughout the life cycle of the test model (in this case honey bees).” He further notes the depending on LD50 findings (i.e. a lethal dose that results in the death of half of the specimens tested) “is not relevant to the modern day chemical toxicity testing.” In other words, regulators need to start testing the long-term impacts of chemicals in the environment, and not simply focused on whether or not they instantly kill test subjects.

Bees play vital roles in a wide-variety of ecosystems as pollinators. In turn they provide massive economic benefits to human society, both through the production of honey and, even more importantly, the pollination of a large variety of fruits, vegetables, nuts, and flower crops. The economic value of honeybees in the U.S. alone has been estimated at $8-12 billion.