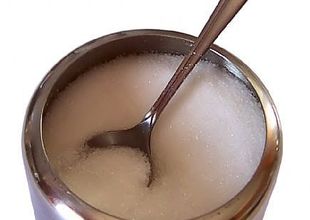 One of my favorite things about the GAPS / SCD diets are that you are also boycotting refined sugar when on them. I have long hated sugar, it is a drug more insidious and harder to kick than tobacco. I have kicked both the tobacco and the sugar habit so I can say this with experience. I love the saying “We are digging our graves with our teeth.” When we eat sugar this is exactly what we are doing. It’s history is as disgusting as the things this white powder does to our bodies. The only way to consume it is fermented in a batch of kombucha, and even then it is best to use a naturally dried type.

It is interesting to note that sugar cane was originally domesticated in New Guinea. I grew up in Papua New Guinea and I remember chewing on sugar cane as a kid. It was actually known as being good for your teeth as it is quite tough and fibrous and strengthens your teeth from the work out they get. I always remember being impressed with the local inhabitants strong teeth. Or check out this Midnight Oil track about the sugar refining company.

Sugar is now 20 percent of the American diet, but it’s not just our health that suffers from its pervasiveness.
January 20, 2012

Americans think an awful lot about sucrose — table sugar — but only in certain ways. We crave it and dream up novel ways to combine it with other ingredients to produce delectable foods; and we worry that we eat too much of it and that it is making us unhealthy or fat. But how often do Americans think about where sugar actually comes from or the people who produce it? As a tropical crop, sugarcane cannot grow in most U.S. states. Most of us do not smell the foul odors coming from sugar refineries, look out over vast expanses of nothing but sugarcane, or speak to those who perform the hard labor required to grow and harvest sugarcane.

Of course, sugar can be made from beets, a temperate crop, and more than half of sugar produced in the United States is. But globally, most of the story of sugar, past and present, centers around sugarcane, not beets, and as biofuels become more common, it is sugarcane that is cultivated for ethanol. What’s more, some conscious eaters avoid beet sugar as most of it is now made from genetically modified sugar beets.

While I do not fool myself that sugar is “healthy,” if I am going to satisfy my sweet tooth, I prefer cane sugar, maple syrup, agave nectar, or honey over the other choices: beet sugar, high fructose corn syrup, and artificial sweeteners. Of the bunch, most Americans can find only honey and perhaps maple syrup sustainably and locally produced, but cane sugar is often the most versatile product for baking.

As a major consumer of cane sugar, I was disturbed to learn the realities of cane sugar production when I visited a sugarcane-producing area in Bolivia.

Sugarcane grew as far as the eye could see on the degraded soils of the deforested industrial agricultural area in Bolivia’s lowlands. At one point, the van I was riding in got stuck in a traffic jam of enormous trucks, each full of sugarcane, delivering their loads to a refinery. The area around the refinery smelled terrible, and the locals told us the smell came from oxidizing ponds that hold the refinery’s wastewater. When the refineries are washed out, typically once a year, the wastewater is dumped into local waterways, resulting in fish kills. This spurred me to learn more about how sugar is made, both in the U.S. and around the world, and how it impacts the land and the people who produce it. Sadly, the story of sugar is also the story of the African slave trade. Today, sugar production still uses exploitative labor practices and can cause serious environmental problems.

Nobody alive today remembers a day when sugar was not a cheap, ubiquitous food in our diets, but historically speaking, it’s actually a relatively recent addition to the European diet, one very tightly intertwined with the African slave trade. As Sidney W. Mintz chronicles in his book Sweetness and Power: The Place of Sugar in Modern History, when cane sugar first appeared in England in the 12th century, only royalty could afford it, and even then, only in small quantities. This is hardly surprising, considering the journey sugar made to reach England.

Sugarcane, a fast-growing tropical grass that reaches 12 to 15 feet high at maturity, was domesticated around 8000 B.C.E. in New Guinea and was carried to India, the Philippines, and perhaps Indonesia some 2,000 years later. By 500 C.E., Indians were making sugar, a process that involves pressing the two-inch-thick cane to extract a dark green juice, rich with nutrients as well as sucrose, then boiling it down to remove liquid and crystalize the sugar. Various processes can be used to refine the sugar so that it is anywhere from a brown color to the chemically pure, white crystal we know today. Of course, until relatively recently, sugar refiners were never able to achieve a mass-produced commodity product so pure that it was completely white.

Click here to cancel reply.
« Regulatory Cooperation Commission decides what North Americans will eat
Raw almonds must be treated, federal judge rules »
We use cookies to ensure that we give you the best experience on our website.
If you continue to use this site we will assume that you are happy with it.