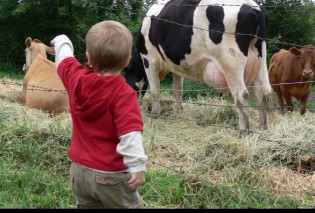 Let’s take a minute to raise our glasses of fresh raw milk to our modern prophet Sally Fallon Morell who wrote Nourishing Traditions and who started this grass-roots Real Milk revolution, and thanks, of course to Weston A. Price for all of his research. There is much more to the movement for direct access to unpasteurized milk, than anyone would imagine at first glance. Modern man has been sanitized and wrapped in plastic in so many ways–we are terrified of micro-organisms–unable to touch anything without rubber gloves or rubber soles on our shoes. We have lost our connection to our roots and our ancestors’ wise traditions. The fragmentation of our local food webs, and the sanitization of our mass packaged foods has destroyed more than just our health, it has sanitized our souls and atrophied our ability to imagine, dream, create and take a chance based on the deep knowing of intuition. More about Weston A. Prices’ eleven pillars of Traditional Diets here.

The following is taken from the forward written by Sally Fallon Morell for The Untold Story of Milk by Ron Schmid, ND

Only one force can reverse milk’s decline and that is the educated consumer, the consumer who demands a quality product, a product that comes from cows on good pasture, that contains all the butterfat that nature put there and that has not been subjected to modern processing. When the consumer once again demands pure and healthy milk, and indicates a willingness to pay a fair price and even travel some distance to obtain such a product, farmers will respond by providing it–a groundswell that will eventually force regulators to abandon their unreasonable opposition.

In the economics of raw milk lies the path to true prosperity, robust returns indeed compared to the dividends of stocks and bonds. No other investment promises such handsome income to the family willing to work. The cow on pasture produces something like 100 hundredweight on milk per year, for which the farmer selling directly to the public receives about $50 per hundredweight. If he has 20 cows, his gross income is about $100,000 per year. The major inputs to this neat system are sunlight, which is free, and labor, which is the perogative of the farmer.

The day will come when no conscientious couple will dream of starting a family until they have found a source of pure and healthy raw milk for their children; when no town planners will proceed without first setting aside the most fertile land for the local dairy; when no doctor will omit raw milk as part of his treatment; and when no government official will dare to impede access in any way to raw milk and other pure foods.

The roadblocks that have denied access to this life-giving food–government regulations and institutional prejudice–must give way to scrutiny as consumer consciousness expands. Are laws against raw milk fair and just? Are they even constitutional? Do they infringe on our right to freedom of religion and the pursuit of happiness? Or do they represent racketeering dressed up in the rhetoric of public good? The reclaimation of our right to healthy food will lead to renewed awareness of our rights in other areas, rights that have been covered over by the steady accumulation of unnecessary laws. The ship of state needs to be careened and subjected to a good barnacle cleaning, and the raw milk movement can provide the first step in this purifying process.

Pasteurization, ultra=pasteurization, sterilization, preservation with a myriad of additives–none of these measures has solved the problem of food-borne illness for the food industry. On the contrary, as food production has become more centralized, the number of food-borne illness cases has risen to 76 million per year! The industry’s solution is yet another technology–irradiation–initially proposed, as was pasteurization, as a voluntary measure that will protect the public good, then promoted vigorously with each new “incident” and with the same glib assurances that the process does nothing to compromise nutritional quality.

Raw milk is a movement whose time has come, one that will change our thinking and the shape of our society in a most beneficial way.

-Sally Fallon in her 2003 forward to The Untold Story of Milk by Ron Schmidt, ND