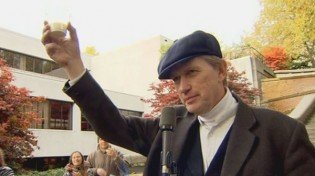 Wow! What great news. We just saw Michael Schmidt here in Vancouver a couple days ago. People from the cowshare expressed how concerned we all are for Michael’s health. We were also amazed at how he was managing to hold up to the extent that he has. He spoke twice on Nov 2nd, both in the morning at the rally at the New Westminster courthouse, where he had a tiny sip of raw milk that one of the cowshare members brought in from Washington state so we could have a ‘legal’ nourishing beverage. And then later in the evening when the cowshare members came together. It is still really hard to understand why Canada has such a blind spot in regards to raw milk. I haven’t spent much time in other areas of Canada, but Vancouver and much of BC seem to be very progressive and intelligent communities pushing for ‘Greener’ urban environments which these types of co-owned farms are tailor made for. This just in from Toronto:

Schmidt began his hunger strike in late September after he was found guilty on 15 of 19 charges related to the sale and distribution of raw milk.

The Durham farmer, who has been fighting for years for the right to sell unpasteurized milk, had a meeting today with the premier’s chief of staff when McGuinty decided to join in.

A spokeswoman for McGuinty says the meeting went well, and Schmidt was invited to speak to the Liberal caucus, but the government will not change its position to allow the sale of raw milk.

The Health Protection and Promotion Act makes it illegal to sell unpasteurized milk in Canada because it’s considered a health hazard. It is, however, legal to drink raw milk.

The province says it will continue to rely on the best advice of medical experts when it comes to selling raw milk.