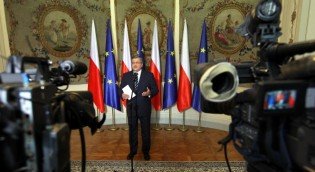 I am very glad to hear that Poland is stepping up and taking care of their people by taking this strong stance on genetically modified organisms. On August 24, 2011 President Bronislaw Komorowski vetoed the so-called “Seed Law” on GM crops, and referred to the bill as “legal junk.” Please read the full article here. Poland’s Minister Marek Sawicki is now calling for a Europe-wide ban:

“We are now proposing to completely prohibit not only the cultivation of GM plants, but also imports of feed and food that is genetically modified,” Minister Marek Sawicki told TVP public television.

“And not just in Poland,” he added.

Sawicki’s remarks come just days after he criticized President Bronislaw Komorowski for vetoing a government bill on the registration of GM seeds, which was intended to bring Polish law in line with EU dictates.

The previous Law and Justice government passed a law in 2006 unilaterally banning the growing of GM foods and exports of seeds. The European Commission consequently referred Poland to the European Court of Justice for passing a law at odds with Brussels directives.

President Komorowski, though not against GM on principle, said this week that the ‘seed bill’ did not in fact sufficiently clarify the issue and declared the law “legal junk” and sent it back to parliament.

Now Minister Sawicki says that the EU should ban GM across the 27-nation bloc. “Here indeed is a task for the Minister of the Environment, to introduce such an initiative under the umbrella of the Polish Presidency [of the EU Council], and we will support him.” Read full article here.