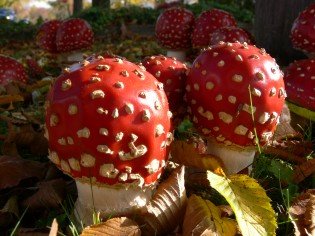 Jesus was the mushroom. – John Allegro

I have also found when I start taking certain types of probiotics, kefir or other fermented foods that these dreams can become more vivid. I have to be careful as I can get addicted to dreams, so I had to stop keeping a dream journal years ago or I would never get any sleep. for the past few years, while I have been sick I haven’t dreamt as much as I used to. This last dream was pretty vivid and probably a result of too much craniosacral therapy, not enough sleep, doubling the amount of probiotics I am taking and thinking too much about raw milk.

Humankind has a special intimate relationship with micro-organisms which needs to be respected. Not all raw milk is created equal and if your own set of gut micro-organisms are depleted, over-run by pathogenic yeasts–basically not well defended and protected, it is a good idea to start with raw kefir or yogurt to build your protective gut layer. People can often react quite violently to new micro-organisms in their body, I grew up overseas so I used to always react to the micro-organisms here in the US. This sort of thing used to be common knowledge. We need more understanding and to remember the ancient connection mankind has to bacteria and yeasts. In our modern mechanically oriented world, we have for some reason decided that the only solution is sterilization and complete elimination. This method historically has been shown to only create more problems in any field that it is used in. We are creating all kinds of super-bacteria which modern medicine has no defence against. We have created our own worst nightmares. (Check out this type of bacteria, hopefully we don’t get them mutating) Please have a look at my post on Antoine Bechamps for more information.

Had a strange dream the other night, but it was pretty funny in some ways too so thought you all might enjoy it. I guess I have been going on so much about raw milk lately that my unconscious is getting stirred up too.

(Side note, for some reason I was wearing my PJs to this trial over raw milk, that wasn’t in a court room at all, it was more like a library or classroom with big windows)

I had my cat with me in a bag, maybe because she likes raw milk too? Who knows…My sister and her kid and another little girl were there and I think my mother and father too. We were all in the court room. I was right up the front with my cat and in comes the Judge. He was a nasty, rude fellow making derogatory comments to pretty much everyone, including me. He was clearly gonna give our case plenty of trouble.

Suddenly someone yelled out “FIRE” and we looked out the window and there was a fire in a barrel, looking pretty contained and normal, but as we watched it suddenly started spreading very rapidly towards us. I tried to gather up all my papers and whatnot, but someone was yelling that we better get moving, so I dropped everything and grabbed my cat shoved her in my bag, grabbed my little niece, someone else grabbed her little friend and we ran for the door. At the door we met my papa and told him to find my sister as she had gone to the bathroom.

We were outside the building at the street for a while and nothing was happening so we peeked back in the door. There was a ton of smoke, but the fire seemed to have gone out without affecting the room. The grass outside was blackened and burned. On my way back to my seat, I passed a few people with lovely red and black with white striped blankets from the Naga people of the Assam around their shoulders and started excitingly asking them about it. I heard young male voices talking behind me about what brainwashed, idiotic, ignorant and obtuse nut jobs these tea-party raw milk nut fanatics were. And how we were just causing trouble for everyone over a stupid dangerous thing, probably because we were just obtuse. I was worried the trial would go badly.

I sat back down and started rubbing Mishka’s (my cat) belly. For some reason she was loving it-she usually hates it. The Judge had come back in and started asking me if the cat was mine. It seemed there was some law about cats being on this side of the street because they peed too much in the gardens or something. But he seemed to like her.

Then my other sister showed up, she came and sat next to me. The Judge suddenly started talking to her like old friends and it turned out he was her professor for some legal class she had had to take. There was also a birthday card going around for everyone to sign right then, and she asked him if he would like to sign it. I looked in the card and saw it was for me and for Bert, our cowshare guy. I was very surprised as it wasn’t even anywhere near my birthday, but it’s always nice to get a card.

The Mushroom and the Cross by John Marco Allegro:


A very interesting series examining Allegro’s ideas on the mushroom and the cross. John Marco Allegro was one of the original translators working on the Nag Hammadi Scrolls, please check it out:

Click here to cancel reply.
« Should We Trust Industrial Dairies?
Raw Milk is a Movement Whose Time Has Come »