Perhaps I have been watching too much Al Jazeera, but that, along with the film Blue Gold: World Water Wars, has got me worrying about folks down in LA. I honestly still can’t believe that Arnold Schwarzenegger is really the governor of California—I keep wondering when I will wake up and find that I have somehow gotten stuck in a chapter from Robert A. Heinlein’s book Job: A Comedy of Justice

. In a parallel universe this must be a big joke. It seems that Los Angeles in particular is at the forefront in showing the world how the United States of America handles our economic difficulties. I have recently rediscovered long lost friends from my high school days in Pasadena via facebook, and I wish I had more answers for establishing sustainable community under the difficult conditions of LA.

The summer has been hot and dry in Vancouver, BC and I have enjoyed the ritual of nightly excursions to water my little garden under the sky-train, which unfortunately recently got mowed. Hauling water under the constantly changing moon gives me time to think and I wonder how different it would be to be doing this in LA. The documentary Blue Gold also highlighted the issues around water that LA faces. We talk about sustainable living and eating locally until all they are is buzz words, and once again we find we are just frantically putting bandages onto something we know is built on a corrupt foundation.

To the extent that people separate themselves from nature, they spin out further and further from the center. At the same time, a centripetal effect asserts itself and the desire to return to nature arises. But if people merely become caught up in reacting moving to the left or to the right, depending on condition the result is only more activity. I believe that even “returning-to-nature” and anti-pollution activities, no matter how commendable, are not moving toward a genuine solution if they are carried out solely in reaction to the over-development of the present age.

After planting my little guerrilla garden in a patch of unattended earth, I soon realized that the soil is sandy, stony and infertile. To really get my tomatoes and beans to grow vigorously from this unloved land, I would need to apply a bunch of fertilizer. Recently I have been delving into the book The One-Straw Revolution: An Introduction to Natural Farming

(aka the Little Green Book) by Masanobu Fukuoka. Masanobu Fukuoka passed away in 2008 and was a scientist who worked for the Japanese government as a researcher on food production during World War II, but eventually returned to his birthplace on Shikoku Island, and devoted himself to innovating his method of “do-nothing” or “natural” farming.

The ultimate goal of farming is not the growing of crops, but the cultivation and perfection of human beings. To be here, caring for a small field, in full possession of the freedom and plenitude of each day, every day—this must have been the original way of agriculture.

Under this method of farming, rice is grown without flooded paddies and replanting, no insecticides or herbicides are used, the fields are direct-seeded with rice and then with winter grain. When the fields are harvested, the grains are collected and all of the straw put back onto the fields. White clover is grown as green manure. Masanobu Fukuoka found that using this method regenerates six inches of fertile topsoil while growing healthy food. Not only that, but the yield from his fields are consistently equal to or greater than those of the industrial and chemical agriculture system. 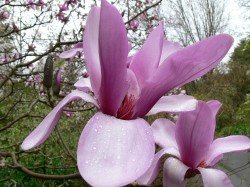 If anyone hasn’t seen the documentary mentioned above, Blue Gold: World Water Wars, take an evening and see it, it is a surprisingly hopeful film, in the end it mentions that simply digging reservoirs or ponds is a good way to catch water before it runs away. This film is considered so necessary to be seen by “every person on the planet” that the filmmaker, Sam Bozzo, is fully supporting distribution and download of it with peer to peer sharing from www.onebigtorrent.org or Pirate Bay, donations are encouraged to help support and share this documentary. The film was inspired by the book by Maude Barlow and Tony Clarke.

A simple way, recommended by Buddha, to heal the earth is to plant a tree. One of my favorite original guerrilla gardening tales comes from the heart of LA at the birth of a place called Basswerks. One of the founders of this art studio/gallery took a pickax to the sidewalk on Adams Blvd and put in a few magnolia trees. The trees disappeared overnight, so he held their replacements in with rebar. This reminds me of a book I read years ago in a magical house we called the NaCl House. This book, The Fifth Sacred Thing

by Starhawk, gives a remarkably clear picture of current dynamics. In this book, the revolution begins with a couple old grannies who go out into the middle of a busy street with pickaxes and start tearing up the asphalt to make gardens and take back control of their own food. An especially pertinent aspect of this tale is that the people trapped in the industrial system were being poisoned into submission by chemicals in their food and water and had to go cold turkey to regain their connection, intuition and ability to feel.

People were also mass vaccinated to the point where they became dependent on the vaccine. Our darkest suspicions about the role of pharmaceutical companies in our lives has been confirmed—the top executives of IG Farben, (the pharmaceutical industry’s Big Daddy) were tried and found guilty for mass murder after World War II. They served short sentences and were soon back to their old habits of making large profits from their business with disease. In June 2003, a complaint was filed against the pharmaceutical industry with the International Criminal Court in The Hague. An archive of documents supporting this complaint can be found at www.profitoverlife.org.

The moral of that old story? Don’t trust those who make money from your poor health.