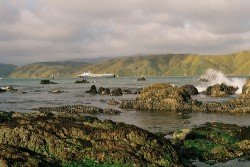 When we first saw the place we moved into we noticed a strange smell, similar to cat urine, infused the whole place. It was dirty and looked as if the last tenant had moved out in a rush. It had large windows and there was a lot of sunlight coming in, so we figured we could clean the place up. That winter was rough, Fred couldn’t find anyone willing to hire him and provide a work visa and I was working out at the Wellington Airport for LSG catering. Airline catering is mind-dulling institutionalized cooking so I blamed the job and our desperate financial condition for rapidly sinking into depression and fatigue.

One night, when the damp warm spring was just beginning, I lifted up our mattress and discovered the bottom of it was covered with mold. We threw it out, and replaced it with an air mattress. Although I vigorously (being a chef I am rather compulsive about cleaning) cleaned out the kitchen cabinets, an unopened bottle of vinegar was completely covered with mold after a month. Even our fridge was unsafe, cheese, sealed in plastic and left overnight would quickly grow mold. My periods were coming only two weeks apart although they are usually very regular. In the meantime my emotional state was getting more paranoid, irritable, subject to crying spells and violent mood swings. Fred’s asthma and allergies, which he hadn’t had for 12 years resurfaced, worse than ever. 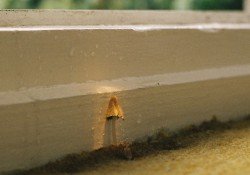 The final cruncher followed three days of me alternately writhing on my bed, my head full of delirious conversations with green wolves, or heaving over the toilet bowl, throwing up bile because there was nothing inside of me. The next thing I remember is walking over to the window and looking at the carpet, wondering what these black cords were coming out from the edge. Looking again I was astonished to see that they were slimy mushrooms. When I called Fred over, he had to look twice before it registering he was looking at mushrooms as well. We were shocked, we never imagined we would witness mushrooms growing out of our carpet.

We got out of that apartment as soon as we could. We tried every legal avenue possible, called every government agency and got a letter from our doctor. We were passed around from one person to the next, no one wanted to take a legal stand, or even examine the fungal infestation. In the end the landlord reluctantly let us out of the lease but never took responsibility and didn’t do a thing to clean up the environment before renting it out again, even refusing to replace the carpet. There were ten other apartment blocks in the building (which is made from unsealed cinder-block) and the owners would loose a lot of money if the whole building was condemned as it should be. We never saw any of the other tenants while we lived there, but fungus doesn’t heed walls, so I am sure their conditions were similar. I don’t know if things have changed, but at the time we found no legal recourse for tenants living in a sick building.

When we first started searching the Internet for information about mould in living environments there wasn’t much information available. More recently, as result of the flooding during Katrina, many health problems have been unavoidably associated with living in mouldy conditions. It can be very difficult to shake fungus once they’re in your home and under your skin. Not only can they cause damage directly through headaches and allergies, but they can cause long term damage by compromising your immune and nervous systems. I was surprised by the way my local friends seemed to take living with mould for granted, a few of them said to us,

You don’t want to be living in a valley where moisture gets trapped, better to live on top of a hill. 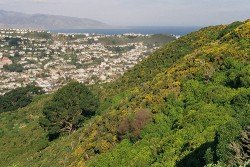 We took their advice and headed to the top of the closest hill and found a great spot in Kingston with a birds-eye view of Wellington. When we moved we took all our clothes and blankets to the laundromat and did our best to sterilize any furniture and books we were taking with us. We moved in and were soon feeling much better. Fred’s asthma improved noticeably, but after about a month, he started to get night sweats that completely drenched the sheets by 3 am every morning.

Fred’s visitor visa expired three months later with no job offer, and we had to leave the country. Once we were in uncontaminated bedding he no longer got night sweats, but our health problems didn’t end there and both of us came down with serious illnesses that required antibiotics which led to further problems. Four years later, we still have to avoid foods with yeast, like bread and beer, but are finally feeling back on the path to better health. The fungus infiltrated Fred’s respiratory system and my digestive system, which continue to be our weak points. One of the results of our run-in with these toxic mushrooms has led to my interest in how digestive organisms affect emotions and brain function, after experiencing first hand the affect that severely unbalanced intestinal flora had on my nervous system. Prior to this experience I had a near invincible immune system—these days I am the first to trip over myself fleeing from the sight of a sneezing child.

In some ways, Aotearoa did me a big favor with this fungal episode—it forced my man—who used to lean more towards the pie-eyed hyper-hygiene, technology and “progress” lover camp—to see the medical establishment from a more Earth friendly holistic point of view, and to really understand his own body. It has taken us four years to process and digest this shattering of our established beliefs and to regain a more sensitive balance with the unseen elements in our environments. This sensitivity has allowed us to experience what is happening to the Earth, and gives us a kindred feeling for the various frog species that are or have been killed off by opportunistic micro-organisms. Amphibians are the first to die or develop reproductive deformities from the damage we have done to the environment.

With global warming and the various chemicals, antibiotics and pharmaceuticals that now are throughout our environment, fungal problems such as ours are on the rise, worldwide. Humanity is finally waking up to the wisdom of our ancestors and is beginning to understand and respect the reasons why they treasured certain heirloom micro-organisms (as I mentioned in last month’s article about Symbiotic Man) and are beginning to fill their environments with home-made cultured foods such as old fashioned pickles, yogurt, sourdough and kombucha.

New Zealand has the second highest asthma rates in the world, I have seen people who were never allergic to anything develop allergies from the dust mites of New Zealand. The Asthma Foundation of New Zealand states on their website:

Around 70-80% of asthma in New Zealand is associated with allergies. One of the most common allergens is produced by the house dust mite.

Some of this trouble may be from the types of fungus the dust mites are feeding on, as New Zealand has unique varieties of fungus, but, following the ancient law of similarities, Aotearoa also has a home-grown anti-fungal wonder provided by the manuka tree. Manuka honey is already being used in hospitals around the world when our last defense of man-made antibiotics have failed (National Geographic even did a piece on manuka infused band-aids). With spring in the air, keep an eye out for moist damp places and use manuka oil aromatherapy to keep fungal and viral micro-organisms balanced in your home environment, and rub a couple drops of manuka oil into your hands as a natural protective barrier while using public transportation or facilities.

Click here to cancel reply.
« Aromatherapy and Cherry Blossoms
Barefoot Lunch-Box Delivery of Mumbai »
We use cookies to ensure that we give you the best experience on our website.
If you continue to use this site we will assume that you are happy with it.