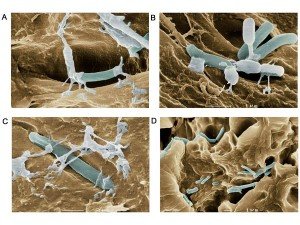 I picked this article up from Organic Connections, the University of Lund has just made some amazing discoveries about bees and their gut flora. The prevalence of antibiotics throughout our environment are destroying their vital diversity. The Burmese have a traditional folk remedy using wild forest honey for the digestive tract. Simply take a spoonful before you go to bed at night. This article explains why this is beneficial.

The stomachs of wild honey bees are full of healthy lactic acid bacteria that can fight bacterial infections in both bees and humans.

A collaboration between researchers at three universities in Sweden—Lund University, the Swedish University of Agricultural Sciences and Karolinska Institutet—has produced findings that could be a step towards solving the problems of both bee deaths and antibiotic resistance.

The researchers have now published their results in the scientific journal PLoS ONE and the legendary science photographer Professor Lennart Nilsson from Karolinska Institutet has illustrated the findings with his unique images.

Today, many people eat healthy lactic acid bacteria that are added to foods such as yogurt.

“In our previous studies, we have looked at honey bees in Sweden. What we have now found from our international studies is that, historically, people of all cultures have consumed the world’s greatest natural blend of healthy bacteria in the form of honey”, says Alejandra Vasquez, a researcher at Lund University.

In wild and fresh honey, which honey hunters collect from bees’ nests in high cliffs and trees, there are billions of healthy lactic acid bacteria of 13 different types. This is in comparison with the 1-3 different types found in commercial probiotic products, she explains.

The honey bees have used these bacteria for 80 million years to produce and protect their honey and their bee bread (bee pollen), which they produce to feed the entire bee colony. The researchers have now also shown that the healthy lactic acid bacteria combat the two most serious bacterial diseases to affect honey bees.

In the journal article, the researchers describe how the bees have these healthy bacteria in their honey stomachs and that they get the bacteria as newborns from the adult bees that feed them. The researchers have also seen that large quantities of harmful microorganisms such as bacteria, yeasts and fungi are found in the nectar and pollen that the bees collect from flowers to make honey and bee bread. These microorganisms could destroy the food through fermentation and mould in just a couple of hours, but in fact, the healthy bacteria in the honey stomach kill all the microorganisms.

“As humans have learnt to use honey to treat sore throats, colds and wounds, our hypothesis is that the healthy bee bacteria can also kill harmful disease bacteria in humans. We have preliminary, unpublished results which show that this could be a new tool to complement or even replace antibiotics”, says Alejandra Vasquez.

The present study also shows that bees’ healthy bacteria die when beekeepers treat bees preventively with antibiotics, which primarily happens in the USA. The bees have their own defence system against disease in the form of cooperative healthy bacteria. However, this system is weakened in commercially farmed bees that are treated with antibiotics, suffer stress, eat synthetic food instead of their own honey and bee bread and are forced to fly in fields sprayed with pesticides.

“Our results provide the research community with an undiscovered key that could explain why bees are dying worldwide in the mysterious ‘colony collapse disorder'”, says Tobias Olofsson.