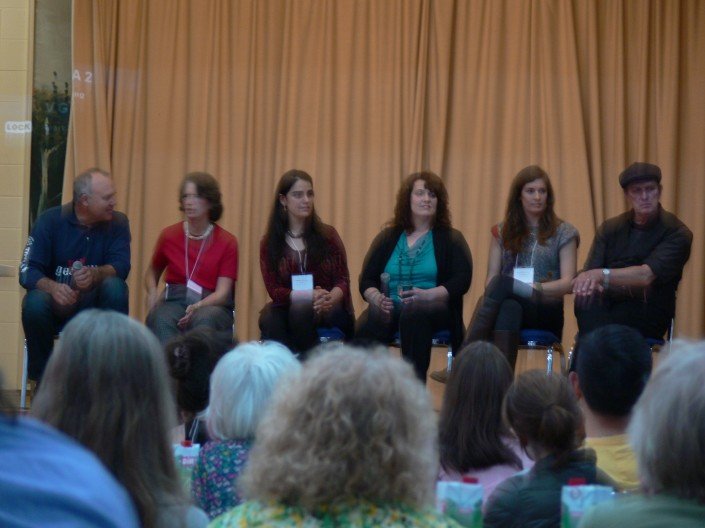 Well it has been a long and talkative day for us raw milk lovers here in BC so I will try to just do a quick summary of the speakers and some of my favorite quotes from each of them for the folks who were unable to attend the Fresh Milk Food Politics conference today. I have uploaded a bunch of photos from the conference to flickr here. The lighting was a bit dim so some of them didn’t come out that well, but please feel free to use the images as you would like.

Jackie Ingram our MC got us right down to business, reminding us that Canada is the only G-8 country that cannot figure out how to incorporate certified raw milk dairies (although they used to) and has simply banned it. 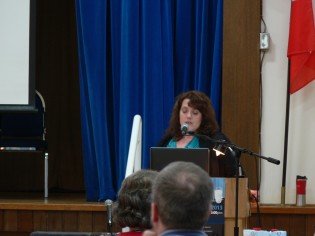 Alice Jongerden started off the day with a personal discussion of the obstacles to farming in North America, reminiscing about Maple, the cow that gave so much milk that she had to share her with her neighbor, which eventually led to more and more friends requesting to join in her cowshare. And of course I really appreciated her comment: “You can’t park a cow on your balcony.” Because we live in an apartment with a very narrow balcony which I often do fantasize about having a goat living on. From there Alice got into the statistics of the dwindling numbers of farmers in North America today and wrapped up her speach with her vision of a brighter future with micro-dairies springing up across Canada.

Jason Gratl our lawyer spoke next and I was very interested to hear what he has to say. I hadn’t realized that he was renowned in Canada for his defence of free expression. He introduced himself with a discussion of truth:

“Truth is something that is difficult to supress …. Once truth is revealed it is then difficult to ignore it.”

He mentioned that he originally got involved in this case because of his previous work fighting for our rights to access natural health supplements, which led him to an understanding of the importance for us all to have a right to control our own nutritional choices and what goes into our own bodies.

I really appreciated what Gratl said about the importance of everyone having access to a “basket of goods” which would provide a nutritional foundation for good health which would include such things as a decent amount of good qualitly protein, fresh vegetables and good pure water. These basic life necessities should be available to everyone across the board. This is definitely something I am eager to fight for, as on occasion I get annoyed I am have to put so much energy into a cause that from a certain perspective can be seen as an elitist, privilaged, white battle — even if we do get the government to grant us permission to have our private cowshares — we will not be allowed to help the poor people living in the DTES who are desperate for good nutrition. In the meantime there is a city in Brazil, Belo Horizonte, which years ago declared a zero hunger food policy and put in place ways to provide such affordable basic nutrition from local farms for their people. If North America is so advanced and cutting-edge, why is it that we are so far behind in providing this most basic necessity across the board? 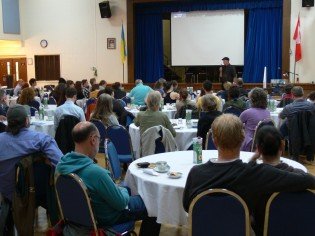 Therefore, I also really appreciated when he laid out a plan of action as to how we can move forward via Alice’s constitutional challenge to bring this issue to the attention of the judicial system and get the constitution to specifically protect the right to basic nutrition for all citizens. The basic plan that he laid out for us is simple and he gave us a sense that we can acheive this, in fact it is practically in our grasp already. His message was very positive — and, at one point he seemed to be encouraging us all to get out there and practice acts of civil disobedience — and to find ways to artfullhy defend these kinds of transgressions.

Karen Selick spoke next, opening with a discussion of how our children are being used against us in order to stir up fear and to make is seem as if we are being “reclace with our children in regard to raw milk.”

“Children have become the latest excuse for everything….The notion that the government knows better than the parent what is good for the kids is BALDERDASH!”

She moved on to a discussion of how large beaurocratic government organizations makes it easy for these institutions to be usurped by politicians with their own interest and pocketbook in mind, who no longer are acting in the public interest. This is clearly seen today in how government officials and institutions are in the pockets of Big Pharma, Big Ag and Big Dairy.

She then brought up the example of how several recent studies have clearly demonstrated the importance of access to raw, farm fresh milk in preventing asthma and allergies. Given that asthma is the third leading cause of hospitalizations in Canada and that there is about 1 death every 18 days from asthma in Canada. Shutting down access to raw milk in Canada, therefore is a criminal act which is harming our children.

Hayley Lapalme from My Sustainable Canada spoke next, giving us a good overview of the various issues and inroads made into encouraging institutions such as hospitals, schools and prisons to keep their dollars in the local economy by buying local produce. It was interesting to hear this discussion as I have just spent a lot of time in the University of Washington medical center caring for my mother and had an opportunity to view first-hand how such an institution likes to “greenwash” themselves by putting supposedly local and organic food on their menu. U of W hospital has gotten all kinds of awards for this sort of thing, but I was disappointed to discover that they don’t even make their own bone broth as a basis for their foods. 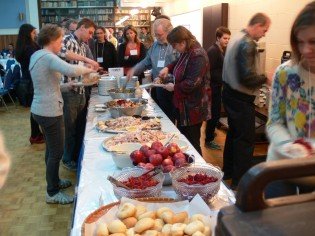 Michael Schmidt who Jackie called “Our stubborn German” was up next and he gave us some of his personal background with growing up with the rise of the Nazis and his history of interaction with the various Canadian health authorities who raided his farm, sent in undercover spies to join his cowshare and more. He stressed again how important it is to remember that even these government officals who seem to think they can mindlessly hide behind the excuse that they are “just doing their jobs” are still human underneath it all.

After a delicious lunch break in which we dined on chicken provided by Polderside Farms, rolls from Terra Breads and more, Mark McAfee of Organic Pastures in California gave us an info-packed hour with some very hopeful news about how the raw milk movement in the US is gaining strength.

Some favorite quotes from him include:

“What you need is food that serves your gut-life, not shelf-life.”

“You can do CPR on pasteurized milk by culturing it.” 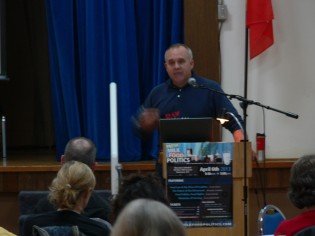 Despite the dairy industry in the US spending 35 million dollars to try to get more people to drink pasteurized milk sales continue to drastically drop. “Dead milk is dying in the US, but sales of yogurt and cheeses continues to grow.”

He then moved into an interesting area with his statement that “Breast feeding is absolutely heroic.” There are some amazing studies being done at UC Davis which is also putting out the newsletter SPLASH which covers topics from breast-feeding to culturing foods. Unfortunately this cutting-edge information is being suppressed by the USDA and FDA. One of the interesting studies he mentioned was how breast feeding is actually a two-way process — a symbiotic relationship in which the microorganisms in the babies system will enter into the ducts in the mother’s nipple, the mother will then produce antibodies to these critters and when the baby drinks the milk the milk will be specifically engineered to be the most immune boosting food for that particular baby.

He then pointed out that we are all bacteriosapiens and therefore sterilizing our food is the perfect way to kill ourselves all off, as we are currently witnessing.

Mark McAfee then gave us his beautiful vision of a future where milk will be branded according to the farmer, cows and terrain on which the grass for the cows grew. In fact he sees a day when milk will be viewed as a fine wine is, with the notes of flavor being determined by these factors, and us humans as having regained the abiltity to taste the subtle nuances of the differences in the milk.

Nadine Ijaz spoke next with a very scientific examination of the science behind the raw milk controversy and debunked several raw milk myths. This was a particularly interesting piece as it stirred up a discussion as to the benefits and shortcomings of our modern scientific studies. 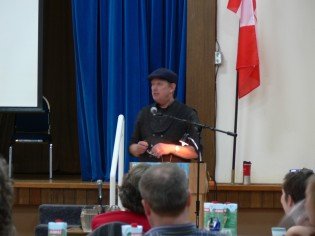 Alice Jongerden spoke again, this time about the benefits of herdsharing, and then Michael Schmidt spoke on the future of the movement….

A few favorite quotes from Michael:

“We are all missing the grounding here and raw milk brings us back to the Earth.”

“If you can kiss the ass of a cow, then you know it is a good farm.”

This was all followed by a Q and A session to the panel, which brought up some more interesting discussion on scientific studies….

Click here to cancel reply.
« The Benefits Of Raw Milk Cosmetics
The Family Cow – Raw Milk Safety and Government Manipulation »
We use cookies to ensure that we give you the best experience on our website.
If you continue to use this site we will assume that you are happy with it.