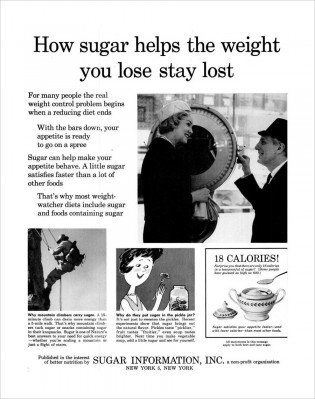 Indeed, in the 1960s a publicity campaign had extolled the healthful virtues of sugar. The advertisements they sent me featured an illustration of a person on the run and the following copy:

Sugar, it’s the shortest route to energy. Muscles, brain, and nerves need a rest from teh stress put upon them, and not only does sugar wipe out fatigue but it feeds the nerve cells.

Two for the flavor, one for health…instead of automatically using two sugar cubes, I consciously use three.”

One ad depicted a pilot at the controls with a teacup in his hand:

A pilot…is aware of the energy he gets from that hot, sweet drink. Obviously, drinking a cup of tea with two sugar cubes isn’t enought to safely land a Boeing. But, when you’re driving planes all day it certainly is useful.

The ads explained everything. Now I understand why attempts to limit sugar intake are regarded with increduclity. And I stand in awe of the power of a publicity campaign that has never quit working, at least in the countryside.

Click here to cancel reply.
« The Great Canadian Cosmetic Conspiracy
History of Harassment: The Little Chilliwack Dairy »
We use cookies to ensure that we give you the best experience on our website.
If you continue to use this site we will assume that you are happy with it.