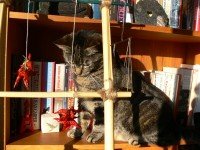 One note about the raw liver, if you get it from factory farmed chickens it is likely to be high in toxins and not very good, try to get free-range or organic livers, preferably get them from a farmer you know. Same with the raw milk. Not all raw milk is equal, the type of raw milk I am talking about is from a local small-scale dairy where the cows are grass-fed and treated well. It is best to know your farmer if you are getting raw milk as well.

The following article is reposted from www.therawfoodsite.com. More information can also be found at the Price-Pottenger Nutrition Foundation.

From 1932 to 1942, Dr. Francis Marion Pottenger, Jr. (frequently misspelled Pottinger) conducted an experiment to determine the effects of heat-processed food on cats.

This ten-year cat study was prompted by the high death rate among his laboratory cats undergoing operations to remove their adrenal glands. At that time, there were no chemical procedures to measure the strength of adrenal extract. So, manufacturers used cats. Cats die without their adrenal glands. So, the amount of extract the cats needed to keep them alive allowed the manufacturers to calibrate the strength of their product.

Concerned with the cats poor postoperative survival, Dr. Pottenger noticed the cats showed a decrease in their reproductive capacity and many of the kittens born in the laboratory had skeletal deformities and organ malfunctions.

By a quirk of fate, since the number of cats donated by his neighbors in Monrovia, California kept increasing, he couldn’t handle the demand for cooked meat scraps. So, he ordered raw meat scraps from a local meat packing plant, including the viscera, muscle and bone. Always a scientist, Dr. Pottenger fed these raw meat scraps to a segregated group of cats so that he could observe any change. Within a few months, this group appeared healthier, their kittens more vigorous, and they had a higher survival rate after their operations.

The contrast between the two sets of cats was so startling, it prompted Dr. Pottenger to perform a controlled experiment to verify these facts scientifically.

The experiment included 900 cats over four generations and was well documented by Dr. Pottenger. The cats were divided into five groups. All the groups were supplied the same basic minimal diet, but the major portion of the diets were varied. Two of the groups were fed whole foods (raw milk and meat – real foods for cats). The other three groups were given processed foods: pasteurized, evaporated and condensed milk.

As for applying his results to human nutrition, Dr. Pottenger said,

“While no attempt will be made to correlate the changes in the animals studied with malformations found in humans, the similarity is so obvious that parallel pictures will suggest themselves.”

Does this give you an understanding of why so many children are now developing cancer? Why there were no fertility clinics 30 years ago?

There is no similar experiment in medical literature. The findings were supervised by Dr. Pottenger along with Dr. Alvin Foord, professor of pathology at the University of Southern California and pathologist at the Huntington Memorial Hospital in Pasadena. These studies met the most rigorous scientific standards of their day.

One thing we have noticed with Mishka, is that when we have to go away or if we run out of liver and have to feed her some tinned cat-food, she immediately becomes extraordinarily grumpy, she gets us up at all hours of the night demanding food and is just generally a nasty cat. Oh yes, and by the way, her bald spot is gone.

Click here to cancel reply.
« Economics as if People Mattered
Canada Raw Milk Farmer’s Call To Arms »
We use cookies to ensure that we give you the best experience on our website.
If you continue to use this site we will assume that you are happy with it.