Wash your hands with yogurt rather than antibacterial soap 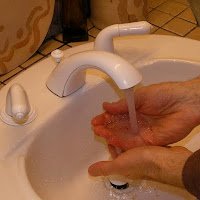 Should doctors and other hospital staff be washing their hands with yogurt rather than antibacterial soap? This odd-sounding suggestion was part of a recent discussion paper by Professor Mark Spigelman of the UCL Centre for Infectious Diseases and International Health. In the paper, Spigelman questioned the current practice of ­using broad-spectrum antibacterial agents on hospital staff’s hands and patients’ wounds, often stripping them of beneficial bacteria only to lay a welcome mat for potentially deadly superbugs.

“Any student who has grown bacteria in a lab will know that they generally do not grow on top of one another,” he pointed out. “So when we wash our hands, we could actually be killing off harmless [normal] bacteria to the extent that we leave space for other bacteria, such as MRSA [Methicillin-resistant Staphylococcus aureus known as superbugs] strains, to settle.”

Spigelman suggested a better ­defence may be to actually encourage the “good” bacteria (probiotics) so that they can discourage the growth of “bad” bacteria.

“Perhaps we should be thinking about ­using probiotics,” he said, “and even dipping our hands after thorough washing into a solution which contains harmless bacteria, which could then colonize our skin and prevent pathogenic bacteria from settling on it.”

Spigelman’s idea may seem radical or ridiculous to some. But for those of us in the natural health field, it makes good sense. Better yet, it’s a sign that modern medicine is beginning to understand and accept the great health potential of probiotics.

“Probiotics” refers to a wide range of beneficial bacteria that normally colonize a healthy intestinal tract. Along with aiding digestion and nutrient absorption, and supporting the immune system, probiotics compete for space with troublesome intestinal bacteria including E. coli and C. difficile. Just as in Dr. Spigelman’s handwashing example, the more good ­intestinal bacteria we have inside, the less chance that bad bacteria have to take hold when they enter the system.

It’s encouraging to learn that in some progressive hospitals, particularly in ­Europe, patients are routinely given probiotic supplements to help guard against hospital-acquired infections like C. difficile and associated diarrhea. I’m also encouraged to see some local doctors ­beginning to send patients to our store for high-quality probiotics to take along with an antibiotic prescription.

One of the most well-researched supplements in this class is a probiotic yeast known as Saccharomyces boulardii. Along with encouraging the growth of good bacteria, S. boulardii helps to reduce the risk of antibiotic-associated diarrhea by limiting the ability of bacterial toxins to bind to the intestinal wall. Studies suggest that taking S. boulardii may also prevent a recurrence of C. difficile-related diarrhea, which is a common problem for many infected patients. Look for S. boulardii products in health food stores.

While hospital and medical staff may be doing their best to control the spread of disease-causing pathogens in hospitals, we can also protect ourselves. If you’re prescribed antibiotics or are required to visit or stay in a hospital, consider a high-quality probiotic supplement to help boost your protective, beneficial bacteria. After all, it may be a while before those hand-sanitizer dispensers are filled with yogurt!

Jason Sebeslav is the owner of The Peanut Mill Natural Foods Market in St. Catharines, Ontario. He has worked in the editorial department of alive magazine and his articles have appeared in many natural health publications. www.thepeanutmill.com

Another good article (also source of image above) Contagious Health from the Cooling Inflammation site.