Article published in the Far West Almanac May 2008. Inspired by the book SELU: Seeking the Corn-Mother’s Wisdom 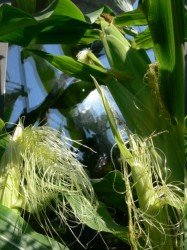 Lately when I find myself thinking about roots, it isn’t long until I start thinking about corn. Edible corn originated in Central America, a gift of the creator in the form of a “catastrophic sexual mutation” about 7,000 years ago. Now it is prevalent all over the world. Chinese are using it to make cheap alcohol and Italians for creamy polenta. Corn is in nearly every processed food item in the supermarket either as corn syrup or corn starch, and is being used to make ethanol for bio-fuel.

Corn was given to the Europeans as a gift, our stories tell us, when they were on the brink of starvation in a new land. Although we celebrate Thanksgiving every year in communion with family to remember those great gifts we were given, the gift of corn has ultimately been disrespected and violated by the “gift” the Europeans gave back to the Americas. This “gift” is a mentality that is ultimately self-serving and greedy — entirely against the spirit of corn.

As a result of this greed a huge percentage of our Earth is now forced to support corn that has been manipulated and violated with foreign genes, creating an item that does not fit into the cycle of life. The beautiful varietal diversity of corn is threatened not only by this genetic manipulation but by the greed of corporations that lobby the US government to subsidize corn to the degree that local, small scale farmers have been left without means of survival worldwide. For the last 20 years the US population has been force-fed this Franken-corn in much the same way as a canard duck being stuffed to produce fois gras for the elite.

Corn is a unique plant in many ways, a grain that First Nation legends tell us sprung from the body of a woman (Genitsi Selu) into a plant that relies on human interaction to grow, a self-sacrificing gift to humanity. Unlike other grains such as wheat or rice, corn’s kernels grow in an easy to harvest manner, in neat rows all around the corn cob, protected tightly in a husk. As a result, it will not grow un-aided in and needs mankind to take the kernels and plant them in rows, tightly together in order to support each other in a large community that can withstand high winds and storms. Kernels of black, red, white and yellow can be found co-habitating happily together on a single corn cob. Corn symbolizes community, working together, self-sacrifice, unity in diversity and democracy.

The same people who offered us the gift of corn also gave us our democracy which is model led on the Iroquois Confederacy (League of the Haudenosaunee). Established about 600 years ago it is the oldest democracy in the world and based on the Great Law of Peace. The Great Law has its roots in the seed and spirit of corn, unity in diversity, many individual communities coming together into a single larger organism. Similar to how the gift of corn has been manipulated for the benefit of the few; the gift of democracy has also been twisted to control instead of support the people.

To be honest, I never gave corn much thought until last year. I grew up in a remote village in Papua New Guinea, daughter of Americans of European descent. The first thing my mother would do, whenever we moved into a new home, was to make a garden and plant sweet corn to give her something familiar in a wild land. As a result of this upbringing I have had a close and personal outsider’s perspective of modern American society and how we are affecting the world. I spent most of my life vaguely uncomfortable, an undercurrent of questions I didn’t dare to think, scratching at me, which found their voice through Father James Guadalupe Carney who was killed by US trained Honduran security forces:

These are questions that we need to face.

A little more than a year ago we moved to the gorgeous Catskills, where the Great Law of Peace originated and I got a different perspective on the country I was born in. Small farms and local people all grow and love corn. Every time we had friends over they brought freshly picked corn from a roadside stand. Every one of them had their own special way to prepare the corn; in husk or out, roasted, or boiled, with or without butter. I finally had my own garden. Through close proximity to people working the land in small scale respectful ways, I have finally come to see the “down home” side of America. This is the side the world needs to see, not the commercial propaganda distributed by multinational corporations.

We need to embody the spirit of corn. The widespread up-swell of support for local and organic food and small scale artisan products is our best hope for happiness and security. Fortunately we are already well on our way, although we are only recently hearing more about this movement as mainstream media and large corporations jump on the “organic” bandwagon, organizations and individuals have been creating networks of self-sustainable conscious living for years. The ideals which corn created have deepened and matured, they are just waiting for us to harvest them.

Some of my favorite resources for corn:
SELU: Seeking the Corn-Mother’s Wisdom

Quoted questions by Father Carney taken from Pathologies of Power: Health, Human Rights, and the New War on the Poor