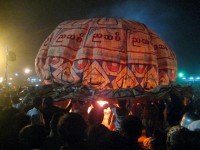 I was looking back over some of my diary entries during the time I was working in Shan State at a beautiful hotel called Inle Princess Resort on the shores of the mystical Inle Lake. During this time I was training some of the kitchen staff in baking and pastry skills as well as sourcing various baking items for the hotel. I will hopefully get around to posting some of the other adventures I had soon as well. It was a really wonderful and unique experience. I lived there for around four months.

Well, I must say the past couple of days have been an absolute pleasure and indeed so much fun. It was the time of the Taungyii festival of lights, which is famous for their huge hot air balloon competition which runs for about 4-5 days and ends on the November full moon (called Thasaung Mong in Burma). People come from all over Myanmar to join the fun. During the festival they send $30,000 up into the sky at the barest minimum. I and some of the kitchen staff took off for the festival early in the morning on the 21st of November, 1999. Taungyii is the capital of Shan State and sits about 4000 feet (1300 meters) above sea level. It was so cold I could scarcely believe it! 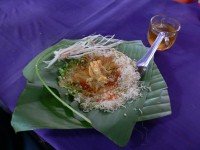 Rounding the corner of the main road, suddenly this most lovely pagoda up on the hill comes into view, looking as if it is floating on the clouds. On the walkway up to it the road is crowded with stalls filled with coffee-mix, Indian candies, beer-gardens and other food stalls with Intha fish and rice, pancakes and other items. I tried everything I would have to say.

During this festival there is also a parade (Kathein thingan) which ends up proceeding along this road and consists of trees made of made of money and other things (robes, laundry detergent and other necessities) which are donated to the monks. After the parade we went play various games (much like a fair) to try to win some money, to no avail. Then we headed back down the mountain and ran into one of Inle Princesses bartenders who was taking an exam for university. The girls decided they wanted to go back to Nyaung Shwe (little town that is the gateway to Inle Lake) so off they went.

I wanted to stay, so I wandered around the market and bought a few items there. At that time there was an amazing raw ruby market on top floor of the market. I was heading to buy some things from the 151 Store when who should appear but the bartender, let’s call him Y.W. He was looking for his friends so we headed back up to the pagoda to see if we could spot them.

When we got there I took a seat in the TOURIST area (there were hardly any foreigners there and the locals were kept out so I had a great view) and watched the sun set as he went running off to look for his friends again. When he got back we went back to the Inle Princess office headquarters in the back of a pick-up and I met a young Burmese man who was in the Teak business with Holland, I was trying to figure out how above board his operations were when the owner of Inle Princess Resort showed up with a friend.

Soon we all headed off to a concert by very famous Burmese rock group–Emperor. It was really fun. After we got bored of the concert we headed off to the check out the fire balloon festival. The guys wanted beer so we found a small beer garden and some very delicious treats made in banana leaves, and some barbecued dried venison. We sat and drank the afternoon away. Finally, we headed off to see the massive fire balloons the Taungyii festival is so famous for.

We walked into a large field that was very misty and smoky. There were small little fires all over with people huddled together trying to warm themselves (it was an especially cold winter that year). It was such a beautiful scene, I felt I had stepped back in time. Just as we got there a fire balloon was going up. As I have mentioned, these things are massive (around 50 feet high when inflated). The most amazing thing about these balloons is that they are made from traditional Shan paper with lovely decorations on them. After the balloon is filled with hot air they attach a big platform of fire-works underneath it. This particular balloon rose magnificantly into the air as one of our local friends started hollering…”Attention, Attention!” and sure enough, soon the platform under the balloon began exploding everywhere and the whole thing went up in smoke. People were running everywhere to get away from the shooting fireworks. After that excitement we decided to find a nice spot, a safe distance away to watch the show and have some drinks and snacks. The next balloon was perfect and floated away into the starry sky with fireworks exploding all around and the happy crowds going wild below. The pagoda magnificently overlooked the scene, all lit up so that it seemed to be just hanging in the air.

Then we dragged ourselves back to our guest-house for the night.

The next morning was great. I woke up to Shan Noodles and a hot shower. Later another of the hotel’s bartenders and I headed slowly back to Inle Princess Resort. When we finally got to the jetty to catch a boat back to the hotel, it turned out there were no boats leaving until 5:00pm so we had to go get a horse cart. Boy oh boy was my butt paining (the road to the hotel was unpaved and very bumpy, and no cushions on the horse cart!). When I got back I quickly put together the frosting for a birthday cake and then met some friends, who were touring Myanmar.

The next thing I knew we were off for Taungyii again to see the fire-balloons. We had a lovely boat ride in the full moon, the last night of the festival. Arriving in Nyaung Shwe we found the town completely deserted–everyone was at the festival. Luckily, we managed to find the last car in town and off we headed to Taungyii.

The show was great. We went up to the pagoda and saw two perfect balloon flights take off. Then we headed down to the field and almost missed the whole show by watching the wrong balloon. Suddenly one really drunk kid yelled in English “Hey look at the balloon!” We turned around and there it was rising slowly into the air.

One of my friends had his video camera stuck to his eye as he filmed the operation. I warned them both to be ready to make a run for it if things started going badly.

The men started to attach the fireworks to the platform under the balloon, but when they were almost done they somehow lit the fireworks before the balloon was up in the air and away from the crowd. I saw it coming and screamed at my friends to run for it, and then I was off running, with no thought for the other two. Fireworks were blasting in every direction and people were running all over the place. Smoke clogged the air. Some folks were crouching down protecting their heads with their arms. I kept running, leaping over a few people crouched on the ground. When I finally recovered my senses, I sheepishly went back to find the couple I was with, they were laughing but looked quite shook up and said they had hidden under their blanket and had been fine. We decided we had had enough and went to find our car, and back to Nyaung Shwe we went. That night we stayed at Inle Inn, as it was too late to take the boat back to Inle Princess Resort.

I believe the festival this year (2010) will be around the 20th of November again, if you are anywhere near Myanmar I highly recommend you check it out.

P.S. If you are ever in Taungyii, I also recommend that you try the papaya salad, delicious and quite different from the Thai papaya salad.

Click here to cancel reply.
« BC Crushes Local Food Community
Vote for Hella Delicious Recipe Videos! »
We use cookies to ensure that we give you the best experience on our website.
If you continue to use this site we will assume that you are happy with it.