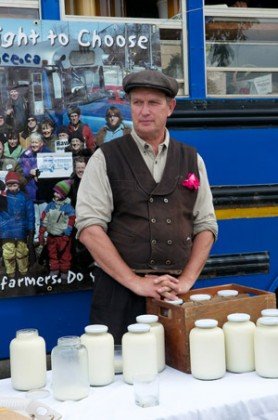 Please join us Nov 2nd with Michael Schmidt and this rally for food freedom and to get corporate agenda’s out of our local food systems. Around the world the situation is getting increasingly insane. Michael Schmidt speaks in this interview about his personal history, growing up in Germany, studying biodynamic agriculture and his 17 year battle with the Canadian regulatory institutions, which finally led to his hunger strike. He is now into his second month and says he is willing to die for our right to choose what we eat and how we want our food to be grown and processed.

Rally will begin at 9:00 am November 2nd at the New Westminster Courthouse.

Please listen to the following interview to understand exactly what is going on here. Michael Schmidt is a very reasonable man and has been doing his best to work with Health Canada for years to improve the quality and to certify raw milk dairies in Canada.

Michael Schmidt has launched himself onto the national scene for doing a simple thing–standing up for what he feels is the right thing to do.

Raised in Germany with a Masters in Agriculture, he created the first certified organic farm with cheese processing facilities, and today cheese from this farm is distributed throughout Germany.

He also began practicing biodynamic principles in farming, and transferred these to his current farm, Glencolton, in Ontario Canada, which he and wife Dorthea purchased in 1983.

With previous knowledge of cows and diary structure, Schmidt set about to create a dairy based on biodynamic principles, which was scrupulously clean, and dealt with the concerns of the cow. Because of this work, Glencolton soon became popular amongst those who heard about his farm, and so a cowshare at Glencolton was set up.

In 1994, however, the government heard about the Schmidt’s program and raided the farm, at various times, taking milk, butter and other products and throwing it into the TOXIC waste dumps (“it’s too dangerous to even put in a regular dump), destroying property, potentially harming animals, and even setting up surveillance on the Schmidts.

In the years that followed, Michael has fought back through publicity campaigns and his farm has continued to supply raw milk to those who tout it’s benefits. His latest fight involves him undergoing a hunger strike until he speaks with Ontario’s Premier, Dalton McGuinty.

Join us as we speak with this remarkable man!

Click here to cancel reply.
« Homebaked Halloween
Ox Mountain »
We use cookies to ensure that we give you the best experience on our website.
If you continue to use this site we will assume that you are happy with it.