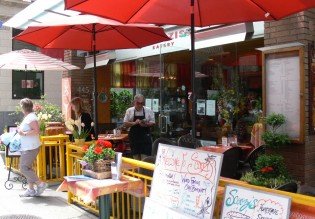 I don’t eat out that often these days because of the GAPS diet, but there are places I do like to go. Scoozi’s is one of them, the soups, omlettes, platters and meatballs are just to die for. The environment is also very nice. Right downtown in Vancouver, BC the restaurant spills out onto the streets, people are happy, the waiters are happy and the food is delicious.

Last time I was there was during a Craniosacral Therapy course and wasn’t feeling so hungry so I just ordered a bowl of fresh fruit and yogurt. The lady who had recommended Scoozi’s had been raving about the variety and freshness of the fruit. She was right. I should have taken a photo. This was a fruit salad like I’ve only seen in S.E. Asia, but with cherries as well. There was dragonfruit and kiwi fruit, nectarines and blueberries…. Now, I have worked in the hospitality industry as you know, and I have in general given up on fruit-salads as I can’t stand the taste of both honeydew and cantaloupe. I know, I am embarrassed to admit this as I like to think of myself as someone who will eat anything, but the mere smell of cantaloupe gets me wretching, and most fruit salads you buy usually have plenty of cantaloupe.

The yogurt too, must be raved about. Homemade Greek yogurt and a good amount of it, topped with this luscious array of fruits and drizzled with local honey, this to me sounds like the ambrosia of the gods and I am getting ready to go back just thinking about it. Perhaps I’ll see you there!