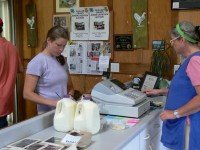 The past few days have been very disturbing, with a judge who is obviously in the pocket of the Milk Industry, refusing to even enter into a discourse about the situation of our local Community Supported Dairy. At the end of the trial he ordered our local Agister, Alice to stop milking our cows (poor cows) and she has been forced to resign as our Agister.

Ontario dairy farmer Michel Schmidt has taken over Chilliwack’s Home on the Range raw milk dairy so the flow of milk can continue to hundreds of members of the co-operative.

Fraser Health has been trying to shut down Home on the Range for more than two years and on Tuesday succeeded in forcing the cowshare operator Alice Jongerden to officially resign as part of a court-ordered condition.

In a press release issued by Jongerden Friday morning, Schmidt says “We have reached the level of a new and powerful dictatorship called bureaucracy in the name of food safety, and in the favour of multinational corporations.”

The point that Michael Schmidt makes here is key. This isn’t really about health or food safety (Maple Leaf foods would have been shut down for causing 20 deaths if that was the case). It is about the monopoly that the milk industry wishes to maintain – as usual it is about greed.

A couple years ago Michael Schmidt faced the same charges in Ontario. In that case the judge was reasonable and overturned the order. The following video shows an interview with him after the trial. He makes some very good points, despite being exhausted from the trail. Please take a second to watch it to better understand the history and what is really behind these attacks on local, family run dairies in Canada.

Vancouver BC is currently promoting the “Greenest City by 2020” initiative. The hypocracy here is blatantly obvious. With local small scale family farms being shut down for the interests of the big dairy industry, how can Vancouver think they will become the greenest city in the world? This demonstrates exactly how far from reality this goal is for Vancouver. As The Green Mama points out in her recent article What is White, Frothy, and Illegal to Sell in B.C.

Canada is the only G8 country where raw milk is outlawed. And after a decision in early 2010 legalizing raw milk cooperatives in Ontario, British Columbia is coming out as one of the most stridently anti-raw milk places in the world.

BC is not at the cutting edge of sustainable living but actually still in the dark ages of corporate monopoly, which is destroying our earth, our health and our freedoms.

This is an issue that even people who don’t eat dairy should be concerned about. If the Fraser Health authorities can remove our freedom to choose what we put in our bodies by starting with this raw milk issue, where will they stop? It’s that old familiar slippery slope…

For anyone concerned about this and who would like to do what you can to help support health freedom, please let your local representative know that this infringement of our rights is not something that the people of BC will support or put up with! You can also donate to the legal defence fund for protecting our food freedom but supporting this co-operative dairy, please let me know if you would like to do so and I will point you in the right direction.

Hopefully with your support we will get our raw milk fully legal, as it is just an hour drive away in Washington, instead of having to go through all kinds of crazy antics to be able to access a very healthy food that humankind has survived on for thousands of years.

P.S. Top photo shows how simple (and normal) it is to buy raw milk in Washington State at the Dungeness Valley Creamery.

Click here to cancel reply.
« She’s on a Mission to Get You to Dance!
Economics as if People Mattered »
We use cookies to ensure that we give you the best experience on our website.
If you continue to use this site we will assume that you are happy with it.