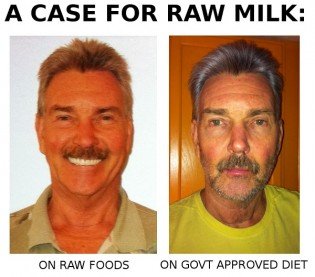 This is just in over the weekend from www.NaturalNews.com. This is really crazy. But you know what the sad thing is? This is the sort of thing that happens every day to minorities and poor people who have no one to stand up for them. Now it is starting to bleed into more upper-class, white-bred communities. One of the things I have seen posted all over the place over the past couple years is an annoying blurb that goes something like this:

The more accurate blurb is:

I really appreciate at the end of the interview when James Stewart speaks up for all the other people who are locked up in the jails, being treated like this on a daily basis for no good reason. The fact of the matter is that most of the people who are in jail don’t deserve to be there.

NaturalNews can now report that 65-year-old senior citizen James Stewart, a raw milk farmer with no criminal history, was nearly tortured to death in the LA County jail this past week. He survived a “week of torturous Hell” at the hands of LA County jail keepers who subjected him to starvation, sleep deprivation, hypothermia, loss of blood circulation to extremities, verbal intimidation, involuntary medical testing and even subjected him to over 30 hours of raw biological sewage filth containing dangerous pathogens.

This is from a county that has targeted and terrorized James Stewart for the supposed crime of selling fresh milk containing “dangerous pathogens.” That’s right – the only “crime” James has ever committed is being the milk man and distributing milk that is openly and honestly kept fresh and raw instead of pasteurized. So as part of his punishment of advocating raw cow’s milk, he was tortured with raw human sewage at the LA County jail.

This true story of jaw-dropping dehumanization and torture — conducted in total violation of state law as well as the Geneva Convention for prisoners of war — is told in an exclusive audio interview recorded today between Mike Adams and James Stewart.

That audio recording, which has been released by Adams into the public domain for the purpose of widespread copying and sharing, is available for download at the following links:

“I thought I was gonna die in there…”

In this exclusive interview, you can hear James Stewart describe, in his own words, the shocking details of prisoner abuse right here in America. Among the highlights from his interview with Mike Adams: