From Walking Sticks to Cancer Prevention 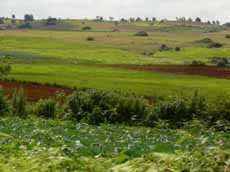 At first glance the cabbage seems rather unremarkable as it is common and inexpensive. It has proven itself for thousands of years to be one of man’s closest friends; providing nourishment, preventing ill health, supporting the ailing body with the strong stalk of the walking stick cabbage and more recently pleasing the eye in frilly purple, white and green varieties. The cabbage is officially a member of the Brassicaceae family, which is more mystically known as Cruciferae because all the flowers have four petals which was seen as resembling the crucifix. Other vegetables of the cross are broccoli, cauliflower, watercress, horseradish, mustard, radish, turnip and rutabaga. All vegetables from this remarkable family have preventative and healing powers as they contain powerful anti-cancer phytonutrients in varying levels along with other important vitamins, minerals and fiber.

Many thousands of years ago as the wild ancestor of today’s cabbage varieties made its way from China to Ireland it was valued by king and commoner alike. Russian princes paid tribute in cabbages. Chinese used cabbages to help bald men grow hair. Romans believed cabbages sprang from the sweat of Jupiter himself and once threw their physicians from the city declaring they would much rather rely on cabbages to keep them healthy. In Greece the senate voted there was no better food than corned beef and cabbage. Pharaohs ate cabbage before drinking so they could drink without getting drunk. In more recent times, cabbage has regained some of its renown of old through the trendy cabbage soup diet, which is mainly used to loose weight, but may also help to detoxify the body. 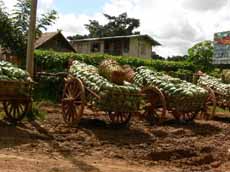 It is rare to find cabbage as a side dish on the menu of a fine restaurant and most of us don’t invite guests to dinner and serve cabbage, although it is actually a very practical addition to our evening meal. Not only is it a great price, but it keeps very well in the refrigerator and is quick and easy to saute up and serve with a squeeze of lemon, or simply shredded and added to salads. With the modern day potential to develop cancer, cabbage is a source of prevention readily available to everyone. Studies have found that eating cabbage once a week may cut chances of developing cancer by 66%. As a result, respect for this vegetable is returning, in fact the 17th of February has been declared World Cabbage Day and is observed by friends and family sharing their favorite cabbage dishes together.

As usual, the benefits of cabbage once known to our ancestors are slowly being proven by modern science. Cabbage juice is found to relieve ulcers, prevent constipation and clear the complexion. As mentioned above, cabbage reduces the risk of many kinds of cancer, including colon, breast and lung cancers, it also stimulates the immune system, kills bacteria and boosts the detoxification system into high gear. Cabbage contains antioxidants, vitamins A and C, potassium, calcium and glucosinolates along with other beneficial nutrients. Glucosinolates, a group of sulfur containing compounds, interact with enzymes to form isothiocyanates and indole-3 carbinol during chopping, cooking or chewing. Indole-3 carbinol has been found especially beneficial in decreasing certain types of estrogen and therefore lowering risk of developing breast and cervical cancer, it also detoxifies tissues and promotes hormone balance. Isothiocyanates, on the other hand, are especially protective against lung cancer. These phytonutrients seem to be more beneficial when eaten as a whole food, indeed it would be highly impractical to buy a bottle of supplements when you can get the same substances from cabbage. 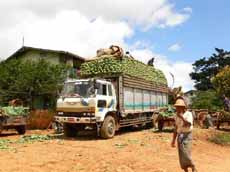 As these phytonutrients are available in varying degrees from cooked or raw cabbage it can be beneficial to include both in the diet. People with thyroid problems should avoid raw cabbage as it contains goitrogens which depresses thyroid function. These substances are neutralized by cooking or fermenting.

Since cabbage gets smellier the longer you cook it (the amount of hydrogen sulfide doubles between the fifth and seventh minute of cooking) it is best to stir fry it briefly, eat it raw or have it in the form of sauerkraut or kimchi. Sauerkraut has been found to have as much as three times the amount of vitamin C as raw cabbage and was used to prevent scurvy on long sea voyages or military marches. Kimchi, of which there are many varieties, often includes some type of seafood as well as Chinese cabbage and spices. Kimchi contains higher amounts of lactic acid than yogurt does as well as many B vitamins. Lactic acid is extremely beneficial for intestinal microflora, has anti-cancer properties and stimulates the immune system. Both sauerkraut and kimchi add flavor to any meal, from Reuben sandwiches to rice and curry.