Mark Mattson is the current Chief of the Laboratory of Neurosciences at the National Institute on Aging. He is also a professor of Neuroscience at The Johns Hopkins University. Mattson is one of the foremost researchers in the area of cellular and molecular mechanisms underlying neurodegenerative disorders such as Alzheimer’s Disease, Parkinson’s Disease, and amyotrophic lateral sclerosis.

“Fasting is a challenge to your brain and your brain reacts to that challenge of not having food, by activating adaptive stress-response pathways that help your brain cope with stress and resist disease.”

“Challenges to your brain, whether its intermittent fasting, vigorous exercise or cognitive challenges. When this happens neurocircuits are activated, levels of neurotrophic factors such as BDNF increase, that promotes the growth of the neurons and the strengthening of synapses. Also shown on the left of the image, it turns out exercise, intermittent fasting and using your brain, can increase the production of new nerve cells from stem cells, at least in one region of your brain, called the hippocampus.”

“Why are ketones good for neurons? One reason is, they provide an alternative fuel for neurons that boosts the energy levels in the neurons. Recently, we discovered that fasting, by increasing BDNF levels in the brain, this neurotrophic factor, can increase the number of mitochondria in your nerve cells, and the mechanism is very similar to the mechanism whereby exercising your muscles, increases the number of mitochondria in your muscles, the fasting is a mild energetic stress and the neurons respond adaptively by increasing mitochondria which helps them produce more energy, which can increase the ability of neurons to form and maintain synapses and thereby increase learning and memory ability. In addition to increasing neurotrophic factors and the neurono-bioenergetics if you will, we have found intermittent fasting will enhance the ability of your nerve cells to repair DNA.” 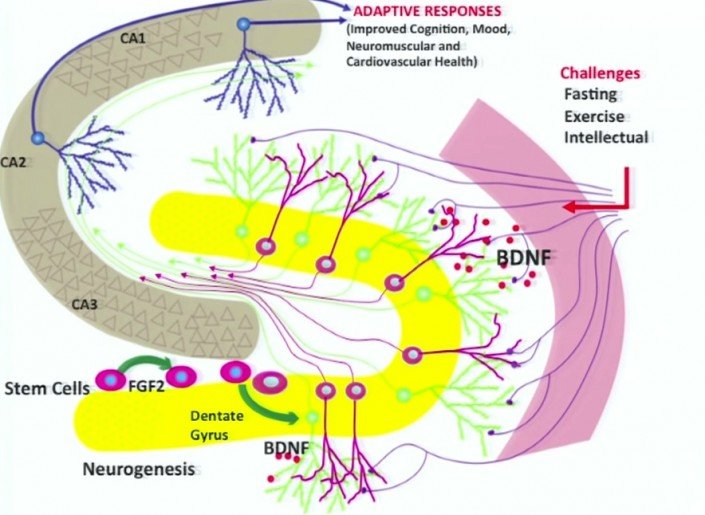 Click here to cancel reply.
« Babies are born Dirty, with a Gutful of Bacteria
We use cookies to ensure that we give you the best experience on our website.
If you continue to use this site we will assume that you are happy with it.