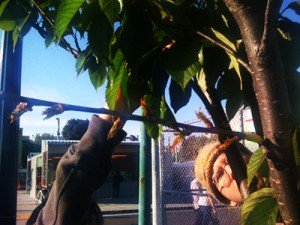 San Francisco is once again spearheading the guerrilla cultural movement with the latest in guerrilla gardening — Guerrilla Grafting in which trees around the city are grafted with delicious, freely available fruits.

The following article is from www.civileats.com City Fruit: Guerrilla Grafting By Patricia Larenas

San Francisco will experience an unexpected windfall of free fruit thanks to a group of graft-happy gardeners. They call themselves the Guerrilla Grafters, and their vision is to see the trees lining the city streets begin to produce perfectly edible food. When I interviewed one of the Guerrilla Grafters recently, I learned that it’s not all about the grafting.

I discovered that Tara (last name withheld to protect her privacy), an early member of the Guerrilla Grafters, cares deeply about the society in which we live and our relationship with public spaces. We had interesting and engaging chat via Skype, and she explained what’s behind their efforts to crowd-source caring for fruiting trees in public spaces.

The Guerrilla Grafters are splicing productive branches onto the city’s non-fruiting ornamental trees and transforming them into fruit bearing trees. They’re methodically repurposing the city’s once strictly ornamental apple, cherry, and pear trees as food producers.

Why didn’t the city plant fruit producing trees in the first place? It seems that fruit trees in urban centers are undesirable since they attract rodents and because of the potential for rotting fruit littering the sidewalks. The Guerrilla Grafters have a solution to those concerns: they only graft trees that have caretakers who commit to their proper upkeep.

The Guerrilla Grafters have been active as a group since last year; they’ve got approximately 130-140 members on their e-mail list for their newsletter and about a dozen who show up regularly for grafting events. Tara described the organization as having a lateral structure–that is, without hierarchy. There are no leaders, just active members, and some members are more active than others.

Their motto: “Undoing civilization one branch at a time…”

Tara became involved with grafting ‘guerrilla style’ after she was unable to get permission to plant productive fruit trees in front of her own house. The city administrators cited concerns about maintenance and liability. She was willing to assume responsibility for these but the city still refused, which she found unreasonable. Tara further discovered that it is simply city policy to not allow fruit producing trees, but apparently no formal law exists prohibiting them.

The Guerrilla Grafters’ goal is to demonstrate that with proper care, fruit trees are not a nuisance and in fact add to the quality of life in the urban environment. In Tara’s view, fruit trees on private property are more likely to suffer from neglect when the owners no longer want to care for the tree or harvest the fruit or when new tenants arrive and are not interested in the trees’ upkeep. This is why the Guerrilla Grafters won’t graft a tree that doesn’t have a committed caretaker. Trees in public spaces have the advantage of being accessible to a number of people that can take over as caretakers when the need arises, and the public can harvest the fruit.

In fact with a little effort, a city with fruit trees can be a food forest.

Beyond grafting for fruit production, caretakers and grafters make the effort to see that the trees are pruned and watered as needed and keep them healthy. They are invested in an activity that is ultimately a public good.

Another interesting piece to the Guerrilla Grafters’ mission is that they are beginning to collect data about the trees they have grafted. They want to monitor how well the trees produce certain varieties of fruit, including the quality. The results of this research should be helpful for urban gardeners in San Francisco, which is well known for its varied microclimates. She is seeking help with their Web site to enable this data-gathering project.

The Grinch Who Hacked Trees

Sadly, they recently discovered that the trees they grafted in the Hayes Valley area of San Francisco were severely pruned, including all of the grafted branches. This was unnecessary solely for ‘pruning” purposes.’ They lost all of the grafted Asian pears that were ripening there.

Apparently the now popular YouTube video about the grafters inadvertently gave away the location of these grafted trees. The video was never meant to circulate widely and advertise their activities. It was made for a demonstration the Guerilla Grafters were giving at a conference, but they never even used it.

Patricia Larenas is an enthusiastic advocate of transforming conventional urban and suburban gardens into edible landscapes. She recently left her career as a project manager in the tech sector in Silicon Valley, California, to devote her time to gardening and writing about growing and eating fresh food, preserving our food heritage by gardening with heirlooms, and agricultural issues. She is a regular contributor to Eat Drink Better, and maintains her own blog, Urban Artichoke.