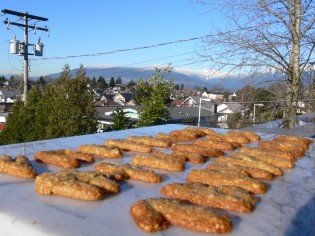 Some of you may have thought that I am a Christian because of how much I talk about my MK (missionary kid) upbringing in Papua New Guinea (who wouldn’t enjoy being a kid in the jungles of PNG?). The truth of the matter is I no longer call myself Christian. The thing that kept me on the fence for so long was going to one of the most liberal colleges in the US, studying anthropology there and finding out that Western non-Christians aren’t much different than Christians. That surprised me and made me question my disgust with Christianity.

Leaving high school I was so disillusioned with the hypocrisy of most of the Christians I encountered I was ready to have nothing to do with Christianity. If I had gone to a Christian college like Toccoa I probably would have been done with Christianity right away–or committed suicide. I will say here that I know many authentic Christians, my family included so I am not trying to rag on Christianity specifically. What I have found, is the world outside of Christianity has just as much bullshit and hypocrisy as the Christians do. In fact many people who are not Christians are just as self-righteous as the most upity, down-the-nose-looking Christian. This seems to be especially bad in Western countries particularly the US, UK, Canada, NZ and Australia. In my book many Atheists are at the root the same as Christians. They still have many puritanical notions, are rigid in their thinking, are racist and unable to understand people who are different than them. They see everything in black and white.

Anyway, why the rant? Unfortunately I, and probably most of you as well–in the last decade or so–especially now there is an acceleration because of wikileaks, the economy crashing and whatnot–we are all realising that we have grown up believing a pack of lies. These people running things don’t have a clue what they are doing and are confusing the hell out of everyone as a result.

I grew up with the most amazing older sister. She was two years older than me and loved to pretend we were twins, she was the boy and I was the girl. She is half Vietnamese and half African American, she and my eldest sister were adopted after my parents were married in Vietnam (they were pretty hippy Christians it seems). Well let me tell you, my sister was brilliant and had the most active imagination of anyone I have ever met. The only one who I can really compare to her is my current partner who’s head is as full of dreams and mystery as hers was when we were young. She could tell a story! And she did it with such authority that everyone always believed her. Did you ever hear that quote of Hitler’s that went something like

“The bigger the lie, the easier it is to get them to believe it.”

Yeah, that seemed to be her natural philosophy as well (not that she is anything like Hitler!). I was her testing ground and I believed everything she told me.

It wasn’t until I got to college that I began to really unravel all the confused beliefs that I had about all sorts of things that I had learned from her. I remember one night when we were in bed, knocking on the woven bamboo wall (we had a secret code rapping system to talk to each other in our bunk bed at night) and then asking her urgently what black holes were. She had an amazing explanation that still beats any that I have heard from the scientists. 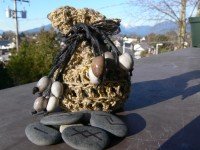 I am off track. The point of all of this is simply to say that I have realized that I need to take control of my own rituals and to know why and when I should do something and how that will impact my life. I have finally started embodying this concept more and more as a result of the diet that we are on which involves cooking and processing all of your own food. It is a no-grain, honey and cooked or dried fruit only diet with plenty of home-made fermented vegetables (GAP Syndrome Diet).

Taking back control of as much as I can of the steps of food processing has had an amazing and unexpected impact on my life. I have started to operate following different cycles, one of my main ones, for example is my mid-week milk run to get my raw milk from our community dairy. Other things like shelling, soaking, drying and grinding my nuts to make the flour for my baked goods, or cutting and salting cabbage for sauerkraut, or straining the kefir or kombucha, some of these cycles are longer, some shorter, but in doing all of these various things routinely, I create new rituals that I understand and which are for me.

A few years ago I left my alcoholic, abusive Burmese husband. It was pretty much the hardest thing I have ever done and I felt my heart really crack in half that day. One of the things that shocked me about leaving him was how guilty I felt for it. I didn’t just leave him out of the blue one day. I did everything in my power to make it work, but even now, I can still feel twinges of that guilt. That whole process and the way various people in my life reacted to it broke me down. I also contracted terrible health problems at the same time and various other issues. The good thing about being broken down like that is that it makes you really examine your beliefs and find out what it is that unconsciously influences you, from your own past or from your culture’s past and present. One of the main tools that I have had to help get me through this and figure out how and what I want to really be and do in this existence was the yarrow stalks, which I use for reading the I Ching.

About a year ago I finally met in person a lovely lady who has helped me to heal and start to look to my own roots and find out more about myself. It is actually interesting to think that my own heritage was an area that I knew so little about, like a big black hole. Being an anthropologist, I had never looked into my own history and people or even really food very much–instead spending all my time looking into other people’s cultures. In New Zealand in 2005, shortly after leaving my husband while I was staying with an amazing friend, I gathered and made my own first set of runes. Even at that time, when she introduced me to runes, I didn’t make any connection between them and my ancestors and myself. It wasn’t until last year I started using them regularly as a help to understanding myself and the outer world. 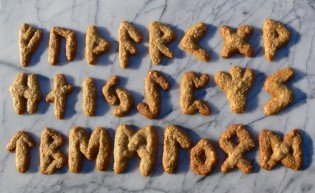 At that point I read Northern Mysteries and Magick a great book by Freya Aswynn which does an amazing job of describing in a holistic manner the nature of each of the 24 runes of the elder futhark. She mentions that when she was first introduced to the runes she made a batch of cakes in the shape of the runes, or marked with the rune and she would eat one each night and embody the experience to really help her whole person to understand and resonate with the rune. Now this sounds like a lovely ritual to me.

In December it is my families tradition to celebrate the Advent of Christ. We had a homemade large calendar–which sometimes travelled the world with us if we were travelling during Christmas time–made from old Christmas cards cut out showing various scenes from the Bible behind a little window for each day. Every night on the 24 days approaching Christmas we would each have a turn to open the window for that day, and read out the Bible verse that was written beside the picture. We loved it! Every Sunday night we would have a special ritual of lighting a candle, eating Christmas cookies and singing some carols. What a great ritual, right?

The last couple years I have been so disillusioned and pissed off with Christmas that I have just done my best to avoid and ignore it, this year I am trying a different approach. In fact, it is the method that Christianity has employed for milenia, I will usurp an old ritual and rework it into something new! My favorite Christmas cookie was the Swedish spritz with butter and almond. I think I just loved the butter, we never got any growing up–we lived on margarine normally–but we would always get butter for the spritz and I would make them.

With the GAP syndrome diet I have discovered what I believe to be the original form of the traditional spritz recipe made with almond flour. I have been working on perfecting this recipe, unfortunately my cookie gun doesn’t work so I haven’t been able to test my recipe to see if it will also shape like a proper spritz cookie, and at the beginning of December I made a couple sets of Spritz runes. Each night we sit down together and have a cup of tea, read the section for the rune and see what else we get as we nibble on the edges of our rune shaped spritz cookie.

It’s an experiment, we’ll see how it goes….but it’s a tasty treat which is an extra bonus as well 🙂

Click here to cancel reply.
« A Plan – Local Solutions to Global Problems
Ubuntu Vancouver Maverick Meerkat Party »
We use cookies to ensure that we give you the best experience on our website.
If you continue to use this site we will assume that you are happy with it.