Wild Yarrow Stalks for the I Ching 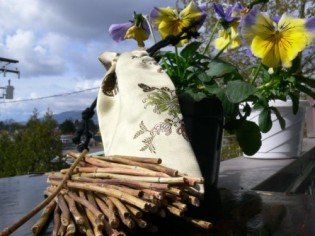 Yarrow was traditionally used for casting oracles with the help of the I Ching, otherwise known as the Book of Changes. 50 stalks are used, one is put aside and the rest are counted and sorted six times, building up the hexagram. Yarrow has been connected with spirituality and receptivity for thousands of years in many traditions.

The yarrow stalks contained in these handmade oracle pouches grew wild in the Catskills of New York. They were harvested with respect and care not to deplete the environment, as a result I have a limited supply each year.

The pouches containing the stalks are handmade from material from thrift shops.

Instructions on how to count the yarrow stalks can be found here.

Note: The I Ching (Book of Changes) is not included.

The fall is a nice time to be working in Egypt because there are lots of long weekends. For one of the long weekends I spent a few days on the Red Sea, doing a lot of snorkeling and reading and relaxing. This last long weekend that just came up, however, I decided that I wanted to do something a bit ...

We were camping last year in the Olympic mountains and found a wonderful bunch of small flat rune stones. I have been using the runes more and more myself over the last year. It has been really nice getting to know a little bit about my own heritage finally! I find the runes to be much better, m ... 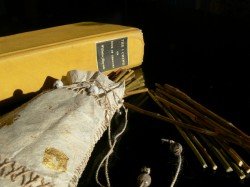 With the global mind shift moving into high gear, more people are getting interested in other ways to slow down and live consciously. As a result we are regaining respect for many things we had dismissed because we did not understand them. Using yarrow stalks to read the I Ching is one of these thin ...