My heart is full of gratitude that I had the opportunity to know this unique and precious woman. Oma (grandma) Harriet passed away on Friday the 3rd of August, 2012. Hella Delicious was originally her idea and she has been our best supporter and kept me going through all the rough patches since we set up the site in June of 2007.

Oma Harriet took me in with an open heart as her own daughter several years ago, and she showed me the best of what a mother can be. Her undying enthusiasm and appreciation for anything her children create is astonishing (especially given some of the atrocities I have produced). She was always the first to show support for any of my projects. The first person I ever sold one of my handmade items to was her, and it was because of her delight in my photos that I started doing recipe calendars and cards. She has provided a never-ending stream of books, articles, ideas and other tid-bits which are the backbone of this website. 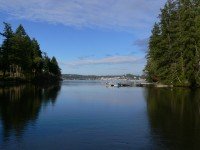 Uncle Walter Johnson, the last of a generation in our family passed away on December 4, 2009. His wife Betty passed away earlier, peacefully and at home, something that Uncle Walter fought hard to have for her. His memorial service was held at Pearson Point in Washington state on the 11th of Decembe ...