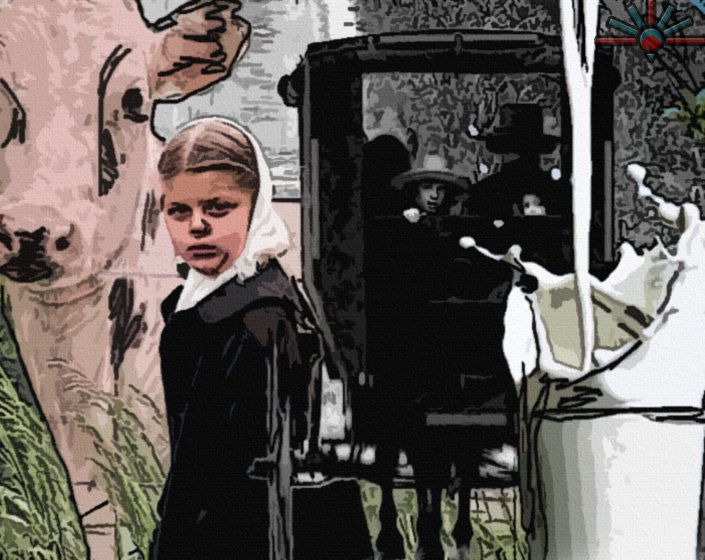 An international team of researchers recently confirmed that children who drink fresh milk–-unprocessed and unpasteurized-–have a better immune response to allergens and are far less likely to develop asthma.

This comes amidst a concerted state and federal effort to criminalize raw milk in the US, with a Minnesota trial and protest scheduled for Monday, May 14.

Researchers from Indiana, Switzerland, and Germany ran surveys and tests on Swiss and US children aged 6-12 years and submitted their results to the Journal of Allergy and Clinical Immunology last month. [1]

Because the Amish emigrated from Switzerland, and are thus genetically similar, the team compared Northern Indiana Amish farm children with today’s Swiss kids. Though rural kids are known to be healthier than city kids, the team found that the Amish have a superior immune response to allergens and asthma than even Swiss farm kids have.

Kimberly Hartke, publicist for the Weston A. Price Foundation in an email to Food Freedom News, said:

“Finally a health professional in America conducted research into the low incidence of allergies among farm kids. This research validates what European researchers have already discovered: Raw milk is health-promoting.”

Over the past century, the US and Europe have seen a spike in “allergic sensitization” reaching more than half the population of both regions, says lead researcher Mark Holbreich. Concurrently, studies in the last decade continue to demonstrate “that certain populations have a significantly lower prevalence of allergic sensitization and a lower prevalence of asthma.”

“In one study, certain whey proteins in farm milk were inversely associated with asthma,” said researchers, referring to a 2011 study, which asserted:

“Exposure to farm milk in early life and consumption of raw farm milk have been associated with a reduced asthma and atopy risk, and it has been suggested that this protection might be mediated through receptors of the innate immune system.” [2]

Atopy is “a genetic predisposition toward the development of immediate hypersensitivity reactions against common environmental antigens,” explains one dictionary.

Holbreich’s team ran a skin prick test on Amish children, most of whom drink raw milk, finding that only 7% of them showed an allergic reaction. They compared this to parental surveys of Swiss kids, both urban and rural. Over 44% of the Swiss non-farm kids suffered from allergies, the parents reported, while 25% of the Swiss farm kids did.

This led the team to conclude that the Amish have additional protective factors, suggesting larger family size may play a role. With 5 or 6 siblings, each child will be exposed to that many more enviro-pathogens, thus gaining the opportunity to develop resistance while the immune system is still developing.

That’s not so for most urbanites who are mostly only exposed to industrial pollutants (rather than microbial pathogens), and denied access to fresh milk beyond their nursing years.

Most US cows are fed a daily regimen of pharmaceuticals, a practice linked directly to antibiotic resistance in humans. The Food & Drug Administration has refused to ban the practice.

Of note, one of the researchers admitted to being funded by the pharmaceutical industry, naming Novartis and GlaxoSmithKline, among others.

Ninety-seven percent of US milk is heated and processed to the point that all probiotics are destroyed, while some pathogens remain.

One probiotic found only in unpasteurized, fresh milk from free-range cows, Lactococcus lactis, became Wisconsin’s state microbe after legislators hailed its unique features which enable the development of cheddar, Colby and Monterey Jack cheese. In fact, when making these cheeses from pasteurized milk, the live bacterium must be added back into the mix to curdle the milk and produce the whey. [3]

As with natural L. lactis, even a genetically reengineered form of it has been shown to break down lactose, allowing those who are lactose intolerant to drink raw milk without ill effects. [4]

In addition to being drug-laden, most US milk has also been adulterated with genetically modified bovine growth hormone (rBST or rBGH), which states and the federal government refuse to disclose on labels.

“The anecdotal evidence is mounting,” said Hartke. “But we need more scientific research to affect a change in our nation’s food policies.”

One immediate policy change demanded by 90% of the public is that all foods containing genetically modified ingredients, including milk, be labeled.

Connecticut’s Governor Dannel Malloy secretly gutted a GMO-food label bill before the legislature even voted on it. Organizers are asking residents to demand that the Governor restore Section 2 of CT HB 5117, An Act Concerning Genetically Engineered Food:

Last month, Vermont Governor Bill Shumlin promised to veto similar legislation. Taking it out of the hands of corporate-owned politicians, Californians will vote on the measure this November.

Over a dozen lobbyists have registered their opposition to the Iowa bill, including those from allopathic medicine, with its jealousy over nature’s superior ability to heal without harm. (Conventional medicine kills more people in the US than any other factor, leading to between 600,000 and 800,000 deaths each year.[7]*) Other supporters represent the usual players: Big Dairy, Big Meat, grocery chains, and their government lackeys. [8]

In Minnesota, “Mothers who host ‘drop sites’ for their farm buying club are being threatened with criminal charges,” adds Hartke. “It’s a new level of intrusion into private contracts between farmers and local customers.”

But, some consumers are willing to risk arrest rather than have the state dictate their food choices.

A civil disobedience action and rally will be held next Monday, May 14, to protest the Minneapolis trial of farm buying club manager, Alvin Schlangen. Sponsored by the Farm Food Freedom Coalition, customers and supporters from around the state and country will rally for Schlangen on the first day of his criminal trial at 7:00 a.m. outside the Minneapolis courthouse. Details about the event are on the Raw Milk Freedom Riders website.

As more people join in asserting our earth-born right to eat what nature provides, keep in mind that humans have been drinking unpasteurized animal milk for at least 10,000 years. [9] We co-evolved with these animals and their micro flora and fauna. All the chemical, nano and genetic additives found in factory foods, we did not evolve with; nor are they good for us.

As we watch industry poison our streams, air and land, as well as our foods, it’s not at all surprising that our health has declined over the past 70 years, with 54% of US citizens and their European cousins showing atopy, [9] with a spike in autism, neurological disorders and cancers for every part of the body. [10]

It’s also not surprising that nature knows better than Big Dairy, Big Pharma, or governments what does a body good. Any laws criminalizing natural food, plants or animals have no place on the planet; they are neither valid nor sane, and need not be enforced or obeyed.