Victoria Grant is a 12-year-old Canadian. Her father and she discovered that the debt money system was what was wrong with the Canadian economy and decided to do something about it. She recites this from memory at the First Annual Public Banking Conference in Philadelphia, April 27-28, 2012. 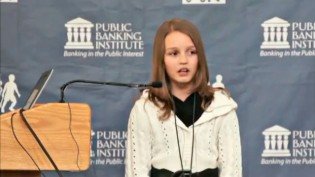 Click here to cancel reply.
« Sick of Being Lied To? Protect Yourself From Radiation With Vitamin C
Rethink the Concept of Banks and Currencies »
We use cookies to ensure that we give you the best experience on our website.
If you continue to use this site we will assume that you are happy with it.