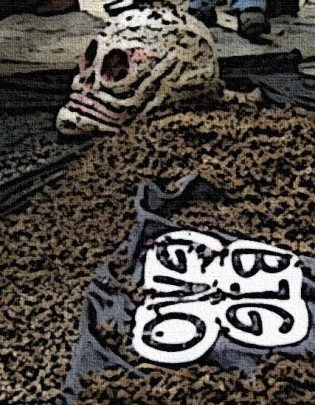 On March 15, over 1,500 beekeepers and their allies marched thru the streets of Warsaw, depositing thousands of dead bees on the steps of the Ministry of Agriculture, in protest of genetically modified foods and their requisite pesticides which are killing bees, moths and other agriculturally-beneficial insects around the globe.

Later that day the Minister of Agriculture, Marek Sawicki, announced plans to ban MON810, which has become ineffective at deterring pests in the US.

GM crops and the pesticides used with them have led to a host of problems (itemized here), including the development of new pathogens. One is associated with spontaneous abortion in cattle and another is responsible for massive methane foaming on manure lagoons which explode, killing thousands of animals in the US since 2001.

The Polish Beekeepers Association organized the protest, joining forces with International Coalition to Protect the Polish Countryside (ICPPC) and the Coalition for a GMO Free Poland. Targeting Monsanto’s MON810 GM corn in particular, they also called for a complete ban on all GM crops and harmful pesticides.

In 2008, the Polish Parliament banned GM feed, including both the planting and importing of GM crops. Food Travels reports:

“Despite this progressive step the European Commission has refused to accept regional bans on GMOs, keeping Polish farmers, producers, and activists on the offensive.” 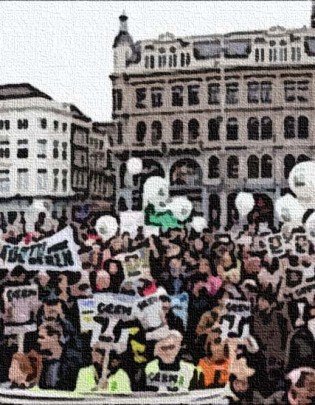 “None of the nine European Union countries that have already prohibited MON 810 did so by asking the permission of the EU.”

Beekeepers dressed in their traditional working uniforms and ran their hive smoke guns as they marched. Some wore yellow jackets with the misattributed quote of Albert Einstein warning that if bees were to die, humanity would soon suffer the same fate. Though he did not say it, it’s true. Most food crops rely on bees for pollination.

Others wore a variety of original costumes, sported signs and banners and carried bee-like objects to draw attention to the plight of these all-important pollinators. More pictures at Stop GMO Festival.

The ICPPC is asking Polish residents to write Minister of Agriculture Marek Sawicki, demanding that he implement an immediate moratorium on GM crops, without waiting for EU approval:

The Organic Consumers Assn. collected info about other actions around the planet during the Shut Down Monsanto Days of Action last week, including Australia, Brazil, Canada, Italy, Greece, Romania and, of course, the US.