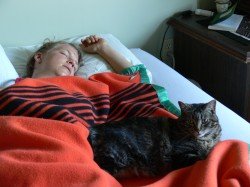 This week I was finally able to send in my application for Health Insurance in Canada. It has been 4 years since I had coverage, and during this period I was the unhealthiest that I have ever been (so typical eh?). In one of those synchronistic events a friend also sent me the link to the video To Your Health by Meena Nanji and Ofunne Obiamiwe. It is hard to fathom what it means on an individual level when we hear numbers like 47 million Americans do not have health insurance and half of all bankruptcies in the United States are caused by medical bills. Embarrassingly, the US also comes in very low on the scale of universal health coverage–ranked at 37th in the world. This video helps to make these facts personal.

After living in New Zealand for several years I got in the much coveted habit of not having to worry about basic health insurance. Not only that but up to a few years ago–when we moved into an apartment that was infested with mold–I was an abnormally healthy individual. The fungus episode, which I have blathered on about here, set off a chain reaction of bad digestive health which culminated in the foolish consumption of a melted popsicle at Mei La Mu Pagoda in Myanmar, giving me a serious case of typhoid. I foolishly moved back to the USA in this weakened condition and joined the millions of Americans without health insurance, and I didn’t like it one bit.

I really appreciate the ending of this video when Oscar says:

“Sometimes I feel like maybe my wife and I should just maybe pick up and move to Canada — Just become Canadians or something!”

That is what we have just done, and now that I am actually feeling quite a bit healthier from all of the kombucha and other live culture foods as well as just being really careful about not putting junk into my digestive system, I don’t need health care for that problem, but it sure is nice to know that if I accidentally chop off a finger, or slip and break my leg that I have health insurance and won’t have to go bankrupt just from seeing a doctor.

More about this video can be found at Movies For Change, please take a second to rate it, add a comment and share it with your friends.