I finally got around to searching for the recipe to this amazing almond and honey energy paste that they eat for breakfast during Ramadan in Morocco. It started niggling at me a few months ago, but the truth was I couldn’t even remember the name of it. I soon found results coming up that were pointing to a treat called Sellou. Soon I was on youtube watching this video by cookingwithalia.com:

Many years ago I lived with a Moroccan family in Rabat. The family had a son and daughter who were around my age. The daughter was wiry, smart and a black belt in taekwondo. The son was refusing to follow the Ramadan fast as he was as skinny as a rake and in the middle of intense exams at his school which are highly competitive. The mother was possessive and passionate, an amazing cook, the father was rarely seen but seemed a very quiet mild-mannered fellow.

Sellou is eaten before the sun rises during Ramadan and is power-packed with energy to get you through a long day of fasting. Each family has their own recipe and whenever I asked for it they would always wave me off, saying that it was so easy just almonds, roasted flour, sesame and honey so I never bothered to write it down. Perhaps this was just their way of keeping their household sellou recipe their own special secret.

Sellou is highly addictive, so be warned, once you start eating it is hard to stop. I don’t know exactly what causes that effect. After searching mightily on the internet I found the ingredients and amounts that most recipes agreed on, most were pretty similar and all included powdered sugar, I didn’t find a recipe for Sellou in the few Moroccan cookbooks I looked through, but I doubt powdered sugar was originally an ingredient in this dish and is probably replacing the traditional gum arabic that isn’t used in cooking much these days, as powdered sugar is cut with corn starch and can also help as a thickener and binder. 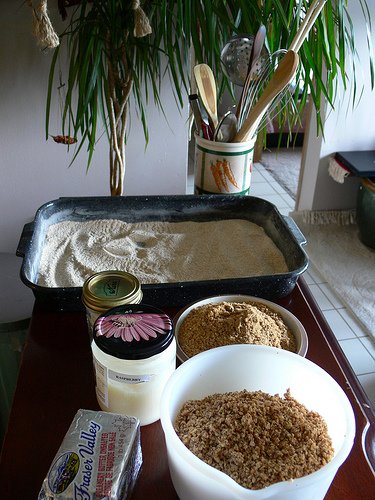 I avoid powdered sugar as much as possible, so I made up a batch using only raw honey. I also soaked the almonds and roasted them in a very low oven for about 12 hours, which it is recommended to do with nuts. On a very hot day nuts can also be roasted in the sun, line the bottom of a pan with tin-foil for extra heat. These are the amounts I used, although I think I should have used more anise, less cinnamon and more honey. I also probably should have sifted the whole wheat flour through a fine sieve first as the wheat germ burned in the oven and made it slightly bitter.

Method:
Grind almonds, sesame seeds and anise to a paste. They can be ground fine or coarse depending on your preference. You can also add gum arabic, which I will do next time. Once everything is ground put the dry ingredients into a bowl and form a well in the center, pour in the warmed clarified butter and honey. Mix the ingredients together very well. The best way to do this is with your hands.

The mixture can be frozen but will be eaten so quickly there is no need to do so unless you are trying to save some for later. Most people prefer to use a food processor these days and doing so shortens the preparation time immensely.

I began the preparation on the dark moon of May 2009, which seemed a fitting time to make a traditional nutritious treat. Sellou is an ancient dish that has come down over time to us as a powerfully nourishing food. I like to do things the old fashioned way so after I roasted the almonds and toasted the sesame seeds, I put the flour in the oven and began to roast that. At the same time I ground the almonds to a paste in my Burmese mortar and pestle. This all took me at least two hours.

It was great, as I worked pressing, crushing and breaking up the almonds and then mushing them more and more until they had completely changed their form, I felt I was working some kind of kitchen alchemy and marveled that the result remained the same and yet different. As I stirred the flour, toasting in the oven, between every batch of almonds I transmogrified into paste, I sank deep into memories of my long-forgotten time in Morocco.

Unfortunately, during my time there I was thrown out of balance from constant harassment and became a bit of a psycho. As a result I have forgotten it for years. The truth is it was mostly a really good time and I met some really special people. Memories of delicious food, good friends and crazy scenarios floated out from the depths. My Moroccan family had been so kind. They really took me in as their own daughter and sibling, yet when I left Morocco, I never looked back or even tried to keep in touch. By the time the almonds and flour were done, I was exhausted and took myself right to bed to dream of rich tajines and apricot jam on the most soul comforting bread ever eaten while sipping on fragrant cups of sweet Louisa tea. There was so much I didn’t understand about that passionate culture and in the end it overwhelmed me.

The above recipe was just my first attempt to re-create this tasty treat, and although it came out very delicious, it is missing something. Maybe it will taste different if I get a chance to use gum arabic. Maybe I will never know what it was that my Moroccan mother used to create her fantastic to die for Sellou, but I am sure glad that I had a chance to enjoy this fantastic tasty, nourishing concoction, with those delightfully hospitable Moroccans, and I hope next time it comes out closer to my idealized long distant memory. This recipe goes out to my long lost Moroccan family. Along with a big huge apology for dropping off the edge of the world.

Click here to cancel reply.
« Alaskan Sourdough
How to Count Yarrow Stalks »
We use cookies to ensure that we give you the best experience on our website.
If you continue to use this site we will assume that you are happy with it.