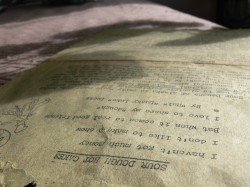 And in the Morning…

(Tip)
If you like these hot cakes and want to share them with your friends, don’t forget to take out two starters. Keep in refrigerator it will be good for weeks. The above recipe calling for 2 cups of flour will provide all the hot cakes 3 people can eat and more than 2 people should eat.

Sourdough has been a cornerstone for the self-sufficient pioneer–all the way back to when wheat was first harvested. In North American history old-time prospectors and pioneers, were nicknamed ‘sourdoughs,’ because they wore their precious sourdough starter in a bag inside their shirts and slept with it under the covers to keep it from freezing. Tended like a treasure, it was shared as a great gift with ‘tenderfeet’ new arrivals to the frontier. A sourdough start was a basic, a fundamental part of the beginning of permanent life in the wild west. Day-time gold pans were dinner-time bread pans. One old sourdough’s rule of thumb was:

If the starter turns orange it is not spoiled, but if it turns green, it must be discarded.

For more history of sourdough this is a great article

There are various ways to make a sourdough starter if you have no access to one, many recipes use commercial yeast but it is very easy to catch wild yeast from the air by following this simple method: 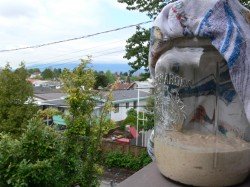 Place 1 cup milk in a glass jar or crock and leave it overnight. In the morning, stir in 1 cup whole wheat flour. Cover with cheesecloth or linen and place outside to catch wild yeast for several hours. Place in a warm, draft free spot for 2 to 5 days (about 80 degrees), depending on how long it takes to bubble and sour. If it gets dry stir in just enough water to get it back to its original consistency. Once it smells fresh and sour and is bubbling it is ready to use.

Each time you use your starter, save some of it and replenish with equal amounts of flour and milk. Leave at room temperature overnight or until it is full of bubbles, then cover and store in the refrigerator. It is good to maintain about one and a half cups of starter. Don’t forget to do this — I keep forgetting and it is so annoying! Especially as I prefer to use raw milk.

This is a great site with tons of interesting sourdough recipes including chocolate cake and brownies! Yum.

Herman starters are another type of starter that uses commercial yeast and sugar. They are often used for making fruit cakes or other delicious cakes. This starter isn’t high maintenance and can be frozen if it is getting too old. There are several Herman starter recipes on the above site, but I particularly liked this one to make a Honey and Whole Wheat Herman Starter. I’m gonna try it as soon as I get me some yeast, and I will have my own Honey Herman to tend to, and who will nourish my soul.

These sourdough blueberry hot-cakes from the barefootkitchenwitch.com sound and look fantastic as well, got my juices going. The best way to eat sourdough hot-cakes is with friends and hot off the griddle.

Trappers not only considered sourdough their “staff of life” for the hot cakes, waffles, muffins and bread it made; but they also used it for tanning hides!

Click here to cancel reply.
« The Heart, Venus and the Rose
Memories of Moroccan Sellou »
We use cookies to ensure that we give you the best experience on our website.
If you continue to use this site we will assume that you are happy with it.