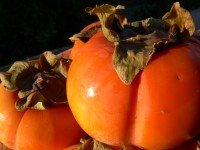 I have never cooked or eaten persimmons very much until coming to Vancouver. This year one of our local backyard gardeners (they have such amazing gardens in this city!) gave me a pile of homegrown persimmons and chokos. 1 1/2 c persimmon pulp (cooked or raw) 3/4 c honey 2 T butter 4 egg yol ...