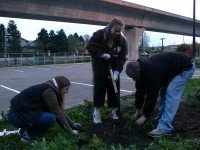 I have been reading up on the diggers and levellers lately what with all of this land-grabbing that is going on around the world. Living in an apartment I always have my eye on any bit of land that looks fertile or even just neglected. Gerrard Winstanley was one of the original land-redistribution activists in the Western tradition. He wrote many pamphlets, this is his most extensive one which gives his ideas of the basic problem in our world (buying and selling) and how we can create a better world for ourselves and our children. It is quite extensive and the whole thing can be viewed here. I have taken some of my favorite passages for you below: