Now this is an incredibly delicious and surprising way to cook an egg. Great for vegetarians as well as people who just love food. 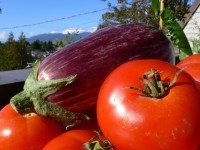 This is a recipe I was meaning to post a couple months ago, and am now doing so I can add it to www.amoderatelife.com's Tenth day of Bloggi-mas that I have been doing my best to be a part of this year. Today is casserole day. I made this for our Canadian Thanksgiving this year and it was a hit. It i ...

I am fortunate to have a long and narrow balcony that gets good sun and has a fantastic view of downtown Vancouver as well as the mountains. Mishka, our hungry cat, just loves to sit on the balcony and feel as if she owns the world. Homegrown tomatoes, eggplant, mozzarella and herbs make an e ...

Everyone will recognize this old favorite! It is so simple and delicious--especially when made with the best homegrown ingredients. Who could resist? I grew my own balcony fingerling eggplants last year! This is a recipe that you can grow at home, even in an urban apartment with only a balcony : ... 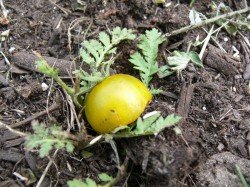 On the evening of August 20th 2009, I took my 20 minute walk, laden with water for my garden. It was the night of the black moon but I was happy loping down the hill the my little bit of greenspace. When I arrived and realized the garden had been mowed to the ground I was in such a state of shock, I ... 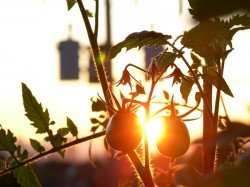 Pests in the Balcony Garden 09

Previous We had a serious attack of spider mites. They started in the catnip and yarrow and somehow got to the choko and beans. They took the choko down in no time, fortunately it is a hardy plant and it has now grown back to where it was when the spider mites devoured it. This was my first re ... 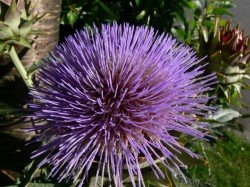 Not only are the gardens of Vancouver BC filled with an assortment of absolutely delicious edible fruits, vegetables and herbs but the micro-farmers are generous and friendly. This fig fresh off the tree was the most juicy I have ever had. Another happy old Chinese farmer gave me a couple of cho ... 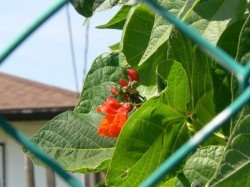 The micro-farms of Vancouver BC are absolutely incredible. After traveling all over the world and being an avid walker I have seen urban backyards from New Zealand to Cambodia, New York to Papua New Guinea and can say that Vancouver BC takes the prize hands down, no questions asked. OK, I have n ... 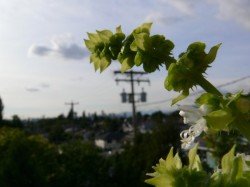 Balcony garden bar overlooking Vancouver, BC. Coriander, tomatoes, chilli, calendula, passionflower, nasturtiums, basil, sage, green-beans and corn. This is the first year with the garden in this location, and the corn didn't do very well--not enough dirt for their roots, they did a good job, co ... 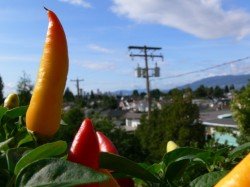 Balcony garden bar overlooking Vancouver, BC. Coriander, tomatoes, chilli, calendula, passionflower, nasturtiums, basil, sage, green-beans and corn. This is the first year with the garden in this location. I have lot to learn about balcony gardening, so thank god for the Internet. ...