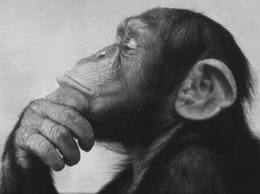 In the South Pacific there was a genius monkey. It is well known that monkeys love yams, but on that island the yams were too sandy to be eaten. This genius monkey took a yam and washed it in the edge of the sea, and then taught her family to do the same. Before long, other members of the tribe had been taught. When the hundredth monkey had learned the lesson, all the monkeys of that species on the island began to do the same. And soon the habit grew up among all those of the same species on the neighboring islands, which were inaccessible to one another. The experience of one had become the experience of the others.

The lesson is that there is a connection among members of a family, and through this communication the benefit of one is shared by all. p 209

From A Treatise on White Magic by Alice Baily