The Vaccine Industry is Floundering 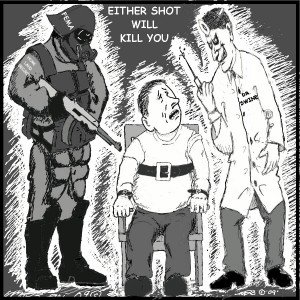 I just wanted to share this article on the state of the vaccine industry. It sure is nice to feel like we might be seeing the end of the tunnel in this area! Do you like the cool cartoon? I am trying to find out who to attribute it to.

Despite a massive campaign the vaccine industry is floundering, very likely near death – and that’s a very good thing. It may well be that, almost singlehandedly, Mark and David Geier, father and son, will provide the mechanism facilitating it’s demise.

What’s that mechanism? The Geiers, and a very large team surrounding them, have focused on the vaccine industry’s continued use of Thimerosal (deadly mercury) as a so-called preservative in vaccines. It has become obvious to parents of millions of American children that vaccines are causing neurological damage (ADD-ADHD, Asthma, Autism, and more), to their young, and that the vaccine industry, working with its public counterparts: the Center for Disease Control (CDC), State Public Health units, and schools, is totally, and completely, responsible for this massive damage. The Geiers say that Thimerosal is the primary culprit.

More, the vaccine industry, part of the also floundering Big Pharma complex, has used its gargantuan financial war chest to outright buy the US Congress, by lobbying to get a law passed removing all vaccine producers from any legal liability.

Wait a minute? Didn’t the vaccine industry claim that they took Thimerosal out of childhood vaccines? Yes, they claimed that – and they lied. They actually did just a show removal, taking Thimerosal out of only 3.48 percent of those vaccines – and all of that was in the US, attempting to mollify, and mislead, American parents of damaged children. About 104 million childhood vaccines are administered, worldwide, each year, and only about 4 million have a preservative other than Thimerosal.

More, despite massive cover-up by the vaccine industry, it is becoming obvious throughout the world that the childhood vaccine schedule is the worst disaster foisted on the human population in Earth’s history. After the US government attacked Iraq, and Afghanistan, we forced, at gunpoint, Iraqi and Afghan children into the vaccine program – and the results were predictable. All of those vaccines were jam-packed with mercury.