American Gut – Learn About Your Microbiome 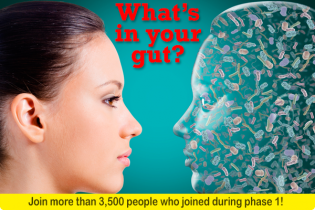 Please join us for Phase II of American Gut. During Phase I we raised $339,213, making it the largest crowd funded & open source SCIENCE project in history. World’s LARGEST open-source, community driven effort to characterize the microbial diversity of the Global Gut. All US and International participants welcome (including your dog).

Join the project via Indigogo here.

We have now expanded the project and anyone in the world can join during Phase II. Help us reach 10,000 participants!

The University of Colorado and the Human Food Project have assembled a crack team of over 30 experts on the human gut microbiome in order to launch American Gut- an open-source scientific research study into the effects of diet on gut bacteria. And they need our help!

The trillions of bacteria living in and on our bodies have been found to play an integral role in our overall health and the development of disease. What is more, research strongly suggests that the state of our microbiome is largely affected by the foods we eat. The only problem is, that we don’t know exactly how.

“By combining the crowd-funding model with the open-access data analysis model that we pioneered with the Earth Microbiome Project, we can finally give anyone with an interest in his or her microbiome an opportunity to participate,” said Knight, a Howard Hughes Medical Institute Early Career Scientist.

Source: Chris Kresser Raw Milk Reality: Is Raw Milk Dangerous? Back in February, the Center for Disease Control (CDC) published a study targeting raw milk as dangerous and unsafe for human consumption. The media jumped on it in typical fashion. You may have seen headlines like this: “ ...

Source: readersupportednews.org - By Katie Rojas-Jahn, Renee Dufault, Institute for Agriculture and Trade Policy The epidemic of autism in children in the United States may be linked to the typical American diet according to a new study published online in Clinical Epigenetics by Renee Dufa ...