Kanboshi(Drying the coldest) Daikon (White Radish) is made in Hida Kamioka (The next town of Takayama) the Yamonomura area as a preserved food for winter. Peeled, sliced radishes are boiled and then hung out under the eaves for about a month to expose them to the cool air. The radishes freeze during in the night when the temperature drops down and defrost again in the sunshine during the day. This process is continued until the radishes dry up and turn a rich caramel color. The radishes become very sweet when dried. This is a typical, traditional food in the snow region.

Wow, now doesn’t that look delicious? I really want to try some of these dried diakons. What a beautiful way to preserve your food.

The world is too much with us; Late and soon, Getting and spending, We lay waste our powers. - Wordsworth This is a great little video from a practical fellow who seems to be one of the ole' sourdoughs from the gold-rush days, returned to tell us how to live more practically. We really don't n ... 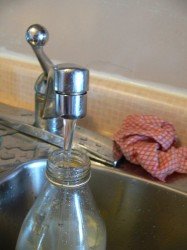 We grew up on some of the best water in the world, it was definitely the tastiest. As a matter of fact, my sister stopped drinking water when she left PNG, she says nothing comes close to that sweet rain-water and its just too much of a let-down to drink any other! We lived in a village 6,000 feet h ...