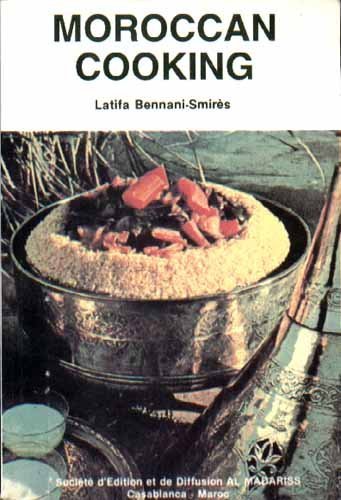 in a second hand store and mentioned that it had a recipe for thistle tajine in it. That immediately got my attention so I got me a copy off of amazon and I don’t regret it! A big thanks to Annie for sharing this! I’d love to hear from other folks if they have favorite traditional world cookbooks like this.

This book is a real treasure of traditional food rituals, and I was delighted to find a recipe for sellou in it as well as other tips on the types of utensils used in cooking and preparation of curds and whey. There are also plenty of great recipes for vegetarians, although it is not a vegetarian cookbook.

Looking through the recipes brough up all kinds of memories from when I studied in Morocco in 1995. I was studying food preparation rituals so I had the opportunity to eat some really tasty food. One of my less tasty memories was during the feast of Aid when every family kills a sheep. During that time the air was full of a metalic smell which hung on you. My Moroccan mother had prepared a delicious dinner with all of the parts of the lamb. But for some reason that evening both my Moroccan brother and sister disappeared on various pretenses and didn’t show up for dinner. I didn’t mind, thinking that there would be all the more for me, until my mother passed me a plate of some thing that looked quite strange and she wouldn’t tell me what it was.

When I tried it, it tasted like mackeral and I have never been much of a fan of that, so I wasn’t too pleased, after I had managed a few bites though, she suddenly tells me that it was the brain of the sheep! I didn’t like it at all. But she had a good laugh. She said she didn’t want me to have an impression that I wouldn’t like it before trying it, so she didn’t want to tell me what it was. It was a good experiment. But perhaps I would like brain cooked in a different manner like these fritters by anoffalexperiment. I haven’t tried it. But after reading this recipe from the cookbook I feel even less like trying it! Perhaps we can get anoffalexperiment to try this recipe for us, since she recently posted about making head cheese.