Hereditary chief George Quocksister Jr., 68, from the Laich-Kwil-Tach Nation has been gathering footage of unhealthy salmon all month. Quocksister has been going from salmon farm to salmon farm along the east coast of Vancouver Island from Cambell River to Alert Bay.

“I’m examining them and seeing what’s going on in them, and it’s sure not very good,” he said on the phone from a boat in a remote area off the coast.

“I’m not a scientist, right, but you can obviously tell they have a disease,” said Quocksister. “It’s beyond horrible.”

The footage has been edited into a video and posted online by independent biologist and marine activist Alexandra Morton.

“I’ve been at this for at least 25 years, very, very intensively, and I’ve never seen footage like this. I made the point in the film, this isn’t one farm, it’s all of them,” said Morton.

She readily admits the video has been selectively cut from hours of footage to show the worst of what Quocksister found at the salmon farms, which are run by Cermaq, Marine Harvest, and Grieg.

“There are also fish that aren’t diseased that are down deeper, but there are diseased fish in those farms and those are the fish that I’m concerned about, so I’m showing them,” said Morton.

She says if anyone — especially the Department of Fisheries and Oceans — is interested in viewing all of the footage, she and Quocksister are ready to make it available.

Cermaq, Marine Harvest and Grieg declined to respond to requests for comment. Marine Harvest deferred to the B.C. Salmon Farmers Association, which represents all three companies.

Second harvest of the year (although my first was only rocket) sweet peas, rocket (arugala), parsley, Thai basil and a touch of coriander. Mixed into a salad with browned salmon and sumac butter. When I have to eat away from home these days I usually end up feeling sick sooner or later so ...

Friday was a great night at the Blenz coffee shop on Seymore Street. The Ubuntu community in Vancouver hit the 500 members mark and we had a great celebration. I love having a party in a coffee shop since these days I don't drink much alcohol--or coffee either for that matter. I had a delicious capp ...

The Swedish usually have this salmon on their smorgasbords and always serve it with this delicious mustard dip. I have altered the recipe slightly here to use honey instead of sugar for a GAPS and SCD friendly recipe. This recipe is very easy to make and is a guaranteed to impress. But be ... 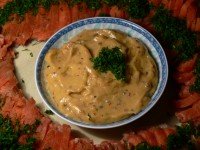 This dip is generally served with Swedish gravad lax, but is good on crackers or as a dressing for salads. 6 T olive oil 4 t cider vinegar 3 t mustard (powdered) 1/2 t salt 1/2 t honey pinch of pepper Method: Mix mustard, salt and cider vinegar together. Slowly drizzle in the olive o ...

Recipe here Inspired by Vietnamese cha gio, these colorful, crispy spring rolls are best wrapped in a crunchy leaf of lettuce with an addition of a fresh aromatic herb, dipped in the delicious sauce and munched on in the company of your favorite people. These spring rolls are a great communit ...

Crispy Salmon and Avocado Spring Rolls My mother taught me how to make cha gios when I was young. She learned how to make them when she was working as a linguist in Vietnam during the war. It was our favorite food as kids and whenever we came home from boarding school for Christmas or summer ho ...