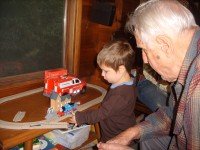 Uncle Walter Johnson, the last of a generation in our family passed away on December 4, 2009. His wife Betty passed away earlier, peacefully and at home, something that Uncle Walter fought hard to have for her. His memorial service was held at Pearson Point in Washington state on the 11th of December, 2009 at the original church built by his ancestor. His grandson Mark, quoted this poem which was one of Uncle Walter’s favorites at the service. I am posting it here in memory of our great Uncle Walter. It sure is a big IF and mighty difficult, but well worth aspiring to.

If by Rudyard Kipling: