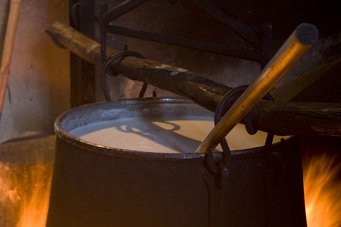 Killing Diversity — the Homogenization and Pastuerization of Cultures

Over the weekend we were invited to a lovely dinner party with an eclectic assortment of people. I immediately found myself deep in conversation with a lovely lady from Greece who told me of her favorite technique for making goat’s milk ricotta. The passion and enthusiasm that came through as she described just how the milk is heated and the lemon juice added was simply delicious. I could practically taste the fresh cheese myself. She was soon onto bewailing the fact that she could only get whole milk, pasteurized and homogenized and that the percentage of fat even in the adulterated full cream milk is ridiculously low in comparison to the percentage she was used to when she made it in Greece with raw milk from local goats. (More info: Manipulated ‘Milk’ and the Loss of the Creamline)

I have had this video sitting open in my browser for months now, I watched half of it at some point and finally just finished watching it. The man speaking is Lee Brown but I don't know anything else about it other than a brief description posted on the youtube channel. It is at the Continental Indi ...

The One-Straw Revolution is Masanobu Fukuoka's manifesto about natural food and farming. It is a collection of short essays that were translated from Japanese. Masanobu was trained as a scientist, but rejected modern agribusiness and centuries of agriculture lore. He perfected what he called the ...