The big fat bullfrog hiding in the reeds here reminds me of the children’s books.

Frogs are dying rapidly around the world at the moment, almost half of them are threatened with extinction. They can’t handle the pollution in our water ways or the chytrid fungus that is rapidly killing amphibians. The site Amphibian Ark is a great resource for information and how you can get involved to preserve frogs for future generation. 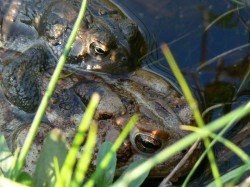